I'm excited to be a part of this tour because, this seems to be the year for historical fiction, whether mysteries or romances, you name it, there are some amazing books out there and this series truly was a treat to discover and kept me turning the pages up until the very end. 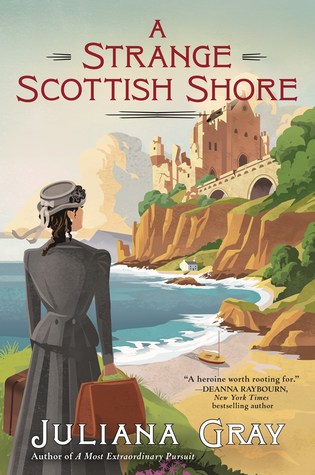 Book Description:
Scotland, 1906. A mysterious object discovered inside an ancient castle calls Maximilian Haywood, the new Duke of Olympia, and his fellow researcher Emmeline Truelove, north to the remote Orkney Islands. No stranger to the study of anachronisms in archeological digs, Haywood is nevertheless puzzled by the artifact: a suit of clothing, which, according to family legend, once belonged to a selkie who rose from the sea in ancient times and married the castle’s first laird.

But Haywood and Truelove soon discover they’re not the only ones interested in the selkie’s strange hide, and when their mutual friend Lord Silverton vanishes in the night from an Edinburgh street, the mystery takes a dangerous turn through time, which only Haywood’s skills and Truelove’s bravery can solve…

I very rarely pick up books out of order in a series but since time was short and I really wanted to read this, I took a chance and dove right into the somewhat murky waters that is this series.

Being that I at the time was craving the historical setting of Scotland, it was hard to resist such a story. I can say without a doubt that while I don't like just diving into a series, I did so with this one with relative ease and little discomfort.

What I didn't expect was this not to be your typical historical mystery. Oh no, not by a long shot. With the added supernatural theme, a romance that is every bit as swoon worthy as you would expect from this time, and an unexpected time traveling element, this book kept me on my toes in a very good way.

Overall it was a delightful read that I thoroughly enjoyed.