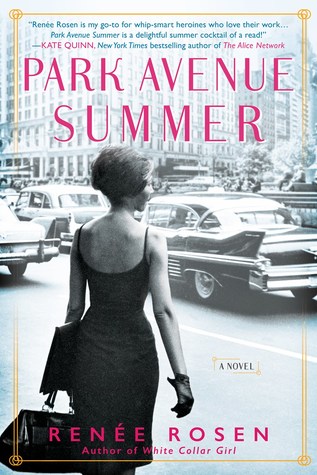 Book Description:
Mad Men meets The Devil Wears Prada as Renée Rosen draws readers into the glamour of 1965 New York City and Cosmopolitan Magazine, where a brazen new Editor-in-Chief--Helen Gurley Brown--shocks America by daring to talk to women about all things off limits...

New York City is filled with opportunities for single girls like Alice Weiss who leaves her small Midwestern town to chase her big city dreams and unexpectedly lands the job of a lifetime working for Helen Gurley Brown, the first female Editor-in-Chief of a then failing Cosmopolitan Magazine.

Nothing could have prepared Alice for the world she enters as editors and writers resign on the spot, refusing to work for the woman who wrote the scandalous bestseller, Sex and the Single Girl. While confidential memos, article ideas, and cover designs keep finding their way into the wrong hands, someone tries to pull Alice into this scheme to sabotage her boss. But Alice remains loyal and becomes all the more determined to help Helen succeed. As pressure mounts at the magazine and Alice struggles to make her way in New York, she quickly learns that in Helen Gurley Brown's world, a woman can demand to have it all.

Renee is the bestselling author of historical fiction including: WINDY CITY BLUES, WHITE COLLAR GIRL, WHAT THE LADY WANTS and DOLLFACE, as well as the YA novel, EVERY CROOKED POT.
PARK AVENUE SUMMER: a Novel of Helen Gurley Brown and Cosmopolitan Magazine will be published in April 30, 2019 from Penguin Random House / Berkley.

Most people discover their love of reading first and then decide to try writing. For Renee Rosen, it was just the opposite. From the time she was a little girl she knew she wanted to be a writer and by age seventeen had completed her first novel, with what she admits was the worst opening line of all time. Her hopes of being the youngest published author on record were soon dashed when her “masterpiece” was repeatedly rejected. Several years and many attempts later, Renee finally became a reader first.

Since then she has been fortunate enough to study the craft of writing from such esteemed novelists as Michael Cunningham, Susan Minot and Carol Anshaw.

Renee now lives in Chicago where she is working on a new novel. You can find her online at https://www.facebook.com/ReneeRosenAu..., https://twitter.com/ReneeRosen1 or visit her website at www.reneerosen.com

Once in awhile you come across a premises that you just know you have to experience for yourself. You pick up a book and you just instantly connect. Not because of the characters or even the setting but just because it simply is written so well that you immediately get sucked into the very story itself and then before you know it, you are in love. In love with the characters, in love with the setting, in love with it all.

Park Avenue Summer is an exceptional read that not only took me by surprise but took my breath away. I absolutely devoured it and adored it and just couldn't get enough of it.
It is so well written, so well voiced and truly something I can't recommend enough. A wonderful insightful look into women in the work place in a time where we weren't quite accepted yet and had to fight for every little triumph and recognition we received.