Delighting In Your Company by Blair McDowell Release Day Blitz and Book Review! 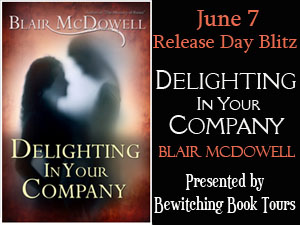 Delighting in Your Company
A Haunting Romance
By Blair McDowell

When Amalie Ansett visits her elderly cousin on the small Caribbean island of St. Clements, the last thing she’s looking for is romance. Just out of a disastrous marriage, she’s ready to swear off men forever.

That is until she meets local plantation owner, Jonathan Evans.

He is tall, good looking, intelligent and incredibly sexy.

An unsolved murder … Then Amalie discovers that the man she loves is a ghost. Only she can see and hear him. Perhaps he is real to her because Amalie is the image of her distant ancestor, Jonathan’s bride in that earlier time.

Jonathan was murdered two hundred years ago, and has no knowledge of who killed him or why. A perilous trip to the past… When Jonathan asks her to help him by returning with him to his past, Amalie is torn. If she helps him solve the mystery surrounding his death, she could lose him forever.

If she doesn’t, she is stuck with a ghost for a lover. And a love that crosses the boundaries of time.

To save Jonathan, Amalie agrees to travel with him back in time to the Caribbean of the 1800’s, when sugar reigned supreme and the slave trade was making fortunes for wealthy planters and ship owners. Her adventures there include a slave uprising, murder, deceit and an enduring love that crosses the boundaries of time. 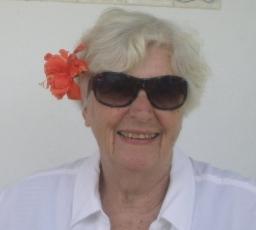 I started to write soon after I found my first pencil. But I began to write for publication about 30 years ago -- professional books. I wrote six of them, all still in print and still in use. Only lately have I turned to fiction.

I'd have done it a lot sooner if I'd had any idea how much fun it was! I’ve lived in many different places. The US -- Certain cities call to me. I love San Francisco and Seattle and the wonderful Oregon Coast. Australia -- among the most open welcoming people in the world, and a wide open young country with incredible land and sea scapes, with amazing animal and bird life right out of science fiction.

Canada -- HOME. The place where I belong. I travel a lot. I usually spend the month of October in Europe, Greece or Italy, and the winter in a little house I built many years ago on a small non-touristy Caribbean Island. I have worked and studied in many places -- Hungary, Australia the US and Canada, and have spoken in most of the States and Provinces as well as Taiwan and various cities in Europe.

I enjoy being surrounded by cultures other than my own. I enjoy my own as well -- but variety is indeed the spice of my life. I keep busy -- and I love my life. I love meeting the people who come here to the west coast of Canada and stay in my B&B. I love traveling after the tourist season is over.

And I love writing. My interests?? Music, especially opera, reading everything in print, and Writing. And walking on the beach and swimming. At one point I had hoped to swim in every major sea and ocean. I've realized that may not be possible in one lifetime -- but trying has been fun!

“This is it. This is where the portal is. When I cross the threshold you must be with me, as close beside me as you can get. I don’t know whether it will work. And I don’t know exactly where or when we will land. Are you ready to do this?”
Amalie merely nodded.
“Then give me your hands and step with me.”
Amalie reached toward him and the faintest brush of an icy breeze touched her fingers. Then the air began to swirl around her and the sky darkened. Wind rushed over and around her. She felt her hands clasped in an iron grip as the earth shook and she tumbled into an abyss, the sound of nothingness roaring in her ears. Consciousness faded.


He was real. Jonathan Evans was what? A ghost, a spirit, a jumbie? But to her he was real. True she couldn’t touch him. She had a fleeting thought that that was a pity. She would rather have liked to touch him. But how could she help him? She wasn’t that other Amalie, no matter what he thought. She couldn’t be, could she? And yet where had those memories of Ansett Plantation come from?
Josephina arrived at the table for breakfast at that moment and all thoughts of ghosts had to be put aside.
“What are your plans for the day, my dear?”
“I’ll spend the morning working in the archives again, and then this afternoon I guess I’ll just swim and read as usual.”
“Could you run me up to town before you begin? I need to see my solicitor.”
“Of course.”
It was mid morning when Amalie entered the basement room at the Museum.
“You!” Amalie looked at Jonathan, perched on her stool, his hair falling over his forehead, his elbows on the table, his long legs stretched out in front of him. He was whistling softly. That same elusive tune.
“You’re rather late getting here. I’ve been searching for evidence.”
She stared at him. He looked so real, so alive.
Reading her thoughts he said, “Jonathan Evans, in the flesh. Except that, unfortunately, I’m not in the flesh. If I were I could kiss you as I should very much like to.”
Amalie flushed. The thought of being held in those arms, caressed, kissed by those lips…she turned her thoughts hastily away from that direction.
“What’s that tune you’re always whistling?”
“Greensleeves.” He sang a phrase, his voice low and melodious.
“Alas, my love, you do me wrong,
To cast me off discourteously,”
He sighed. “You used to sing it.”
“I used to sing it?”
“You used to sing it.”
“It must have been the other Amalie who sang it. But I know it from somewhere. I’m not sure where.” She finished the stanza in her light soprano,
“While I have loved you well and long,
Delighting in your company…”
Jonathan looked long at her. “Of course you know it. You are one with her. Why do you find this so hard to accept?”
Amalie just shook her head. How could she possibly be a woman who died two hundred years ago? She was alive. She was born in the twentieth century. For that matter, how could she possibly be holding this ridiculous conversation with a ghost?


This was such a unique romance, very different from ones currently out there. I loved the paranormal and historical aspect of it, it combined two loves for me and I think that just made it an even better read for me.

This was very well written and done. The character Amalie was real and down to earth and I liked that about her. She seemed like an average person that anyone would know and be associates with.

I really enjoyed her and Johnathan's romance, all the twists and turns and discoveries. This story never lagged and while it is paranormal it never seemed too far out there or really even too unbelievable.

I love how it ended too, it wasn't predictable and it didn't take the easy way out with a sappy ending, instead it still had a HEA that I love but in a very real very good way where everyone got their HEA and it was believable.

This truly was a great fun read that I had a hard time putting down. I almost read it in one sitting.

I will definitely be looking up this author's work in the future.