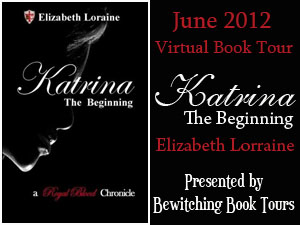 Today I get to bring you Katrina The Beginning by Elizabeth Loraine! 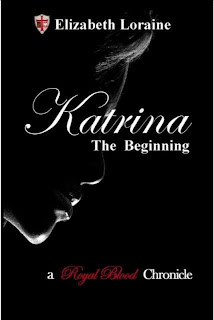 Katrina: The Beginning
By Elizabeth Loraine
Blurb
As a Vampire being hunted was nothing new. Finding out that I had to save those that were hunting us was!

Katrina, a young royal blooded vampire, chronicles her life from the age of seventeen beginning in the 1800's forward in the series Royal Blood Chronicles.

Katrina is thrust into something she never could have imagined growing up in the aristocracy of Europe. Once the fashion of the day, and girlish gossip filled Katrina and her new friends days, but their lives changed the instant their race was threatened and they were chosen as the Five, and the protectors of not only the vampire race, but all the peaceful races of the world!

If you are looking for a new, exciting vampire series, with strong female characters you've found it in Royal Blood Chronicles. It starts here with Katrina, The Beginning! 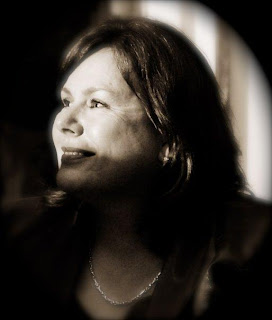 About the Author:
I grew up in a small northern Minnesotan town married my high school sweetheart, had two beautiful children and as soon as we could we moved to a warmer climate. I have worked with my husband building and decorating custom homes for years. After loving every kind of vampire book, movie and series I decided that I wanted to know more. I can write a book I thought, how hard can that be? Well.... But I stuck to it and finished my first book Royal Blood Chronicles Book One in August 2009. I now have six books in the series and am about to release book two of my new series Phantom Lives. My parents always told me that I could do anything that I wanted, work hard, study and do it right. I believe that and live that way every day.

I started writing this new vampire series for teens and their moms because I myself wanted something different to read. I was tired of all the modern versions of vampire books, there had to be more to these long lived beings. Where had they been what had they seen? I wanted, no I NEEDED to know more so Royal Blood Chronicles was born! As in Royal Blood Chronicles, Phantom Lives features strong female characters and action and adventure mixed with romance, friendship and a historical backdrop.

Guest Post:
REDEMPTION, BOOK SEVEN OF ROYAL BLOOD CHRONICLES IS NOW AVAILABLE
I’m so excited to launch Redemption. It’s amazing to think just three years ago I decided to write the first book, Katrina the Beginning. I remember it so clearly. I sat down at my desk with a blank sheet of paper and wrote down the simple idea. Royal blooded vampires in the early 1800’s, a look back at my heroine’s life from the age of 17.
Now there are seven in the series, plus two books of another series Phantom Lives, a paranormal adventure, plus novellas. Hard to believe I did all of that knowing nothing about the process and having never written anything before that time. I know now that it’s what I was born to do.

REDEMPTION continues the story and picks up where Legacy left off. Here’s an excerpt:
CHAPTER ONE

Quinn sat quietly atop the ruins of the ancient Sanctuary and reflected on everything that had happened. He gazed out at the panorama before him and enjoyed the peacefulness of these minutes before sunrise. It would be hours before the mist shrouding the site slipped away. In silent contemplation, he didn’t even notice the cold dampness surrounding him.
For fifteen years he had accepted the fact he would never know his son. He had gladly made the sacrifice, knowing their separation meant his son was safe, and the races would be preserved.
Now all he felt was emptiness. Anger simmered inside him too; boiling close to the surface.
“Damn you Damien!”
Quinn was supposed to be in Bogota re-acquiring lost treasures, but he couldn’t concentrate on it right now. Let someone else take on the task. The Elvin kingdoms were in as much turmoil as the vampires and witches, but despite all the chaos, all he could think about was Katrina.
The sun’s rays peeked over the mountain, highlighting the white mist still blanketing the ruins below. He shook his head. Growing up, all he ever wanted to do was to protect Katrina. Now, not only had he failed to protect her, she was right, he’d betrayed her.
Turning toward the sound of footsteps, Quinn sensed a figure walking out of the mist toward him.
“Eric?”
“It took me a while to find you. What are you doing up here?”
“Feeling sorry for myself. What’s happened?”
Eric walked closer and sat down on the wall next to Quinn.
“They’re gone, Quinn. The boys, our wives, even Damien; all gone.”
Quinn’s stomach lurched and his heartbeat accelerated. “What do you mean, gone; dead?”
“No! No, I’m sorry. They’ve taken the boys from the Fonsdor, and no one has any idea where they are. Even Allwain can’t see them.”
“How? More to the point; why?”
Eric shook his head. “I believe Kremdal planned to separate and move them. Katrina and Kate were convinced their sons were going to be hidden away again and took action to prevent it.”
Quinn stood and stared out into the foggy landscape. “This is their revenge isn’t it?”
Eric scowled. “You know them better than that. They’re not the least bit about revenge, well, maybe Rosa. Admit it, we were wrong, and it’s cost us everything.”


My Thoughts and Review:
This was a fun take on vampires, the story was unusual and it kept my interest.
I was really intrigued by the concept of a royal family of vampires and I really wanted to see how the author would  portray them and what their world would be like.

And while the concept was a good one I do wish there would have been just a little more world building involved. I never did get a good idea in which time period this book took place. We get a feel that it is set around the 1700's when immigrants were first going to the America's but nothing is ever said for sure. I did enjoy the descriptions of the gowns and balls and the mansions that they lived in. It had an almost Renaissance feel to it. Something that I think anyone who loves historical fiction would appreciate for sure.

The character building was pretty good, although there were a few things that bothered me, like the insta in love, insta out of love scenes but, that is pretty common any more in the YA genre so it didn't distract too much from the story.

This book did have a lot of action in it but it also had a few slow spots as well that dragged just a little.

Overall, this was a fun read and a good first book in a series. It will be very interesting to see where the author takes the storyline and the lives of the characters from here.

I would definitely give the next book in the series a chance.

I rate this one 3 Stars!