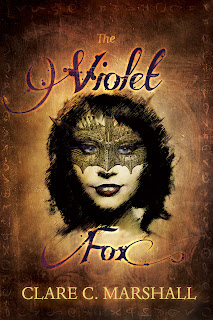 There are two kinds of people in the land of Marlenia.

The Marlenians, who live on the surface,

and the Freetors, who are forced to live underground.

The war between them ended two hundred years ago, but the Freetors still fight for the right to live under the sun. Fifteen-year-old Kiera Driscoll embodies the Freetors' hopes as the Violet Fox. In a violet cape and mask, she sneaks around Marlenia City stealing food and freeing her people from slavery.

Then the Elders task her with a secret mission: retrieve a stolen tome that contains the secrets of Freetor magic, something the Marlenians both fear and covet. Kiera must disguise herself as a noblewoman and infiltrate the Marlenian castle.

Before the Freetor-hating Advisor finds out her real identity.

Before her brother is imprisoned because of the secrets he hides.

And before she falls any more in love with the prince she's supposed to hate.