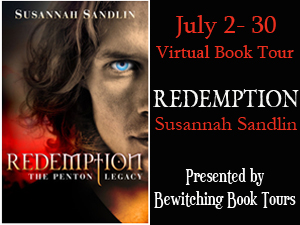 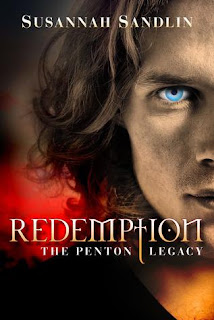 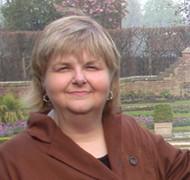 Susannah Sandlin is the author of paranormal romance set in the Deep South, where there are always things that go bump in the night! A journalist by day, Susannah grew up in Alabama reading the gothic novels of Susan Howatch, and always fancied herself living in Cornwall (although she’s never actually been there). Details, details. She also is a fan of Stephen King. The combination of Howatch and King probably explains a lot. Currently a resident of Auburn, Alabama, Susannah has also lived in Illinois, Texas, California, and Louisiana. Her novel Redemption won the paranormal romance category in the 2011 Chicago North RWA Fire and Ice contest, and is the first of three in a series that debuts this year.Website/Blog: http://www.susannahsandlin.com

Already tired of 24/7 Olympics coverage? Well I, for one, am petitioning the International Olympic Committee to host the new Vampire Olympics. Just think of the marketing possibilities: The Olympics that Bite. Blood Games. These Olympics Don’t Suck. Well, you get the idea.

Here are some suggested events, and who I think would win. In order to remain unbiased, I have intentionally not included any of my own vampires in the list, although I see some possibilities, and rest assured they’ll be in training for the next Games.

Vampire Olympic Event: Brooding
Gold Medalist: Bill Compton (Southern Vampires). What a whiner. Soo-kay did well to rid herself of Vampire Bill.
Runner-up: Edward Cullen (Twilight). Seriously. Get over yourself, kid—go off and sparkle somewhere.

Vampire Olympic Event: Iron Man
Gold Medalist: Rhage (Black Dagger Brotherhood). Six-eight, 280 pounds, and can turn into a dragon. What more could you want, really?
Runner-up: Jean-Claude (Anita Blake). Iron man is more than just physical strength, and Jean-Claude has some scary powers, including the ability to control werewolves. If he’d ditch that unhealthy infatuation with Anita, he’d be at the top.

Vampire Olympic Event: Hair and Style
Gold Medalist: Pam (Southern Vampires). Pam is cute, preppy, and snarks to kill. Everybody wants to be Pam’s friend. Well, unless she has you for dinner.
Runner-up: Jean-Claude (Anita Blake). The man has long, dark curls and a never-ending supply of vintage velvet and lace. And swings not only both ways but every-which way.

Vampire Olympic Event: Scheming and Plotting
Gold Medalist: Eric Northman (Southern Vampires). And he’s been scheming since his days as a Viking, so he’s very, very good at it.
Runner-up: Legion. Truly, most vampires excel in this category because they’ve often had centuries with nothing else to do. Eric’s not necessarily better at it, just more entertaining.

Head Coach: Bones, aka Crispin (Night Huntress). I mean did you see how the man, er, vampire ran poor Cat into the ground? Bones knows how to crack a whip.
Assistant Coach: Ivy Tamwood (Hollows). Ivy can devise the game plans, print out instructions, draw maps, and be finished in time for a quick sip of blood before dinner.

The Vampire Olympic Games are held in loving memory of Kisten Phelps. Those of you who’ve read Kim Harrison’s Hollows series know why.

How about you? Other events you can think of? Who would win?

It is no secret that I love reading about vampires. I really have no idea why I am so drawn to stories about them.

Maybe it is the whole idea of good versus evil. Of how love can conquer all or maybe I just like watching them battle with trying to fight the darkness inside and (usually) winning.

Either way, I am drawn to them. And while I love reading about them so much, I also love reading new and different ideas and theories about them because lets face it, no matter how much you love something, the same ole same ole gets tiring and even boring after awhile.

Which might also be why the idea and storyline of Redemption appealed to me so much. I liked the idea of a pandemic sweeping the population of the human world and the side effects of it on the humans blood their blood toxic to vamps, therefore putting their lives (or undead existence) in jeopardy.

And of course, the big bad alpha male falling in love, is always a fun story line as well. :P

This book did not disappoint. Krys and Aidan were great characters, both with a past that was less than stellar at times and both has a lot to overcome.

I absolutely loved their romance and the storyline about vampires was pretty darn entertaining and kept me turning the pages wanting more. I found that once I picked this book up, I had a really hard time putting it down.

I truly didn't want it to end. I don't always find myself saying that at the end of vamp books, I would like to say I love them all and that they are all original but lets face it, they aren't. But this one truly is. It has enough new stuff in it to captivate and enough of the other stuff I like in other vamp books I have enjoyed to make it even better and to pull me into even more.

This is a series and author that I will be keeping on eye on. I liked the writing style, the characters, the storyline..pretty much all of it.

I will be watching and anxiously awaiting the next book.

Don't forget to enter the giveaway below to win a copy (e-book or paperback) of Redemption and a chance to win a $50 Gift Card!!

a Rafflecopter giveaway
Posted by Kindlemom at 5:30 AM