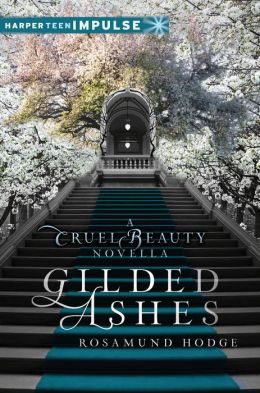 Book Description:
A romantic reimagining of the classic Cinderella fairy tale, Gilded Ashes is a novella by Rosamund Hodge set in the same world as her debut novel, Cruel Beauty.

Maia doesn't see the point of love when it only brings people pain: her dead mother haunts anyone who hurts Maia, and her stepsisters are desperate for their mother's approval, even though she despises them. Meanwhile, Anax, heir to the Duke of Sardis, doesn't believe in love either—not since he discovered that his childhood sweetheart was only using him for his noble title. But when Maia's and Anax's paths cross before the royal ball, they discover that love might not be the curse they once thought. And it might even be the one thing that can save them both.

Fantasy fans who love Kristin Cashore and Rae Carson will find everything they're looking for in this extraordinary and romantic novella.

There was no way I would be able to resist another book set in the deliciously dark world that Rosmund created in Cruel Beauty. This read was a must, in fact I think it was a need more than a want and I wasn't the slightest bit disappointed as I dived right into the twisted retelling of a beloved childhood fairytale.

What can I say about this other than I loved it every bit as much as I did it's predecessor? It was every bit as wonderful and delicious as the first. It rang with the gothic feel and rich description that I fell in love with from Cruel Beauty and my only real complaint was that I didn't want it to be over.

I really hope this will end up being a whole series of dark and twisted retellings because nothing would make me happier and I would gobble them up in a heartbeat.