Review: This is Not the End by Chandler Baker 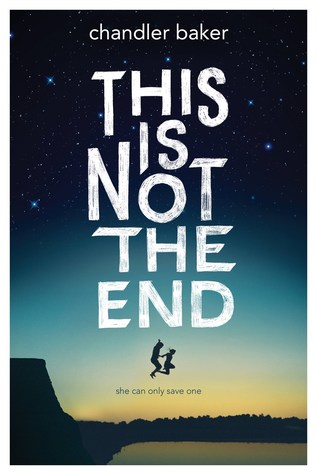 Title: This is Not the End
Author: Chandler Baker
Series: Stand Alone
Published By: Disney-Hyperion (August 8, 2017)
Source: ARC Provided by the Publisher (in exchange for an honest review)
Genre: YA Contemporary
My Rating: 3 Stars

Book Description:
I wonder if for the rest of my life, I’ll be haunted by beautiful days.

On one cloudless, radiant summer afternoon, Lake Devereaux lost everything. The car crash claimed the lives of her best friend and boyfriend, the people who had become her family after her own fell apart. But she doesn’t have to lose them both.

The development of resurrection technology has changed the world. Under the new laws regulating the process, each person gets one resurrection to be used or forfeited on their eighteenth birthday. Mere weeks away from turning eighteen, Lake faces an impossible choice.

Envisioning life without one of the people she loves most is shattering enough, but Lake carries an additional burden: years ago, under family pressure, Lake secretly—and illegally—promised her resurrection to someone who isn’t even dead yet.

The search for answers about her future draws Lake more deeply into the secrets of her past until she begins to question everything about those closest to her. Betrayals and hurts both new and old threaten to eclipse the memories she once cherished.

Then Lake meets a boy unlike anyone she’s encountered before, who unflinchingly embraces the darkest parts of her life . . . and who believes that all resurrections are wrong.


Which path is the right one? And how can Lake start to heal when she can't move on?

This Is Not The End is one of those books that from the very first page, from the very beginning, the prologue, jumps out at you and grabs your attention. The kind that urges you to keep on reading, keep turning those pages because you need to know the before just as much as you need to know the after of the events that took place. The start and maybe even the end, of it all.

It is so hard to describe this book without giving something away so I will try to keep this short and to the point. This book was fun. It was different and it was full of things I didn't see coming. Twists that were unexpected. Some added to the story and others, I think didn't but were there more for the sake of added mystery ad drama but nonetheless still worked.

The whole concept of the story, resurrection was something you don't see very often and that more than anything else, made me want to read this story. And while it did focus on that, I felt that it could have gone so much further with the story if a bit more was explained and compounded but otherwise this was a very engaging story and something different from the norm, especially for this genre that is full of the generic.