Liv Papandreas has a dream job as a sous chef at Nashville’s hottest restaurant. Too bad the celebrity chef owner is less than charming behind kitchen doors. After she catches him harassing a young hostess, she confronts him and gets fired. Liv vows revenge, but she’ll need assistance to take on the powerful chef.

Unfortunately, that means turning to Braden Mack. When Liv’s blackballed from the restaurant scene, the charismatic nightclub entrepreneur offers to help expose her ex-boss, but she is suspicious of his motives. He’ll need to call in reinforcements: the Bromance Book Club.


Inspired by the romantic suspense novel they’re reading, the book club assists Liv in setting up a sting operation to take down the chef. But they’re just as eager to help Mack figure out the way to Liv’s heart... even though she’s determined to squelch the sparks between them before she gets burned.

If you want more humor, more romance, more cheesy yet irresistible one liners and more of the Russian and all his lactose intolerance, this is the story for you.

It will be a toss up between how much more you will laugh, swoon, and how quickly you can turn the pages to get more. So many emotions will run through you while reading this you will feel as if you are on a roller coaster and right there with them through it all. Simply said, it was just more.

It is hard not to love all the men in these stories. They are so sincere and they truly have hearts of gold. And even though they make mistakes, they steal the show with their bromance and be willing to do whatever it takes to get the one that they love, that it makes up for everything else.

The women on the other hand? They are cranky and downright mean and awful at times and, I'm not going to lie, sometimes I found it hard to even like them and their choices but all in all, the author still somehow manages to make you feel for them and they do redeem themselves in the end.

*All thoughts and opinions are my own and were not influenced by the author or publisher. I was not compensated for this review.*
Posted by Kindlemom at 12:00 AM 32 comments: 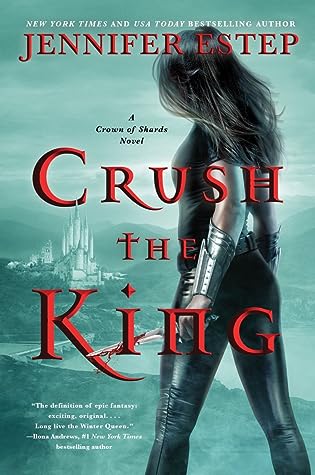 
Book Description:
A fierce gladiator queen must face off against her enemies in an epic battle in this next thrilling installment of New York Times and USA Today bestselling author Jennifer Estep’s Crown of Shards series—an action-packed adventure full of magic, murderous machinations, courtly intrigue, and pulse-pounding romance.

Queen Everleigh Blair of Bellona has survived the mass murder of the royal family, become a fearsome warrior trained by an elite gladiator troupe, and unleashed her ability to destroy magic. After surviving yet another assassination attempt orchestrated by the conniving king of Morta, Evie has had enough. It’s time to turn the tables and take the fight to her enemies.

There is no better opportunity to strike than during the Regalia Games, a time when warriors, nobles, and royals from all the kingdoms come together to compete in various sporting events. With the help of her loyal friends, Evie goes on the attack at the Regalia, but things don’t turn out the way she hopes. Soon, she is facing a terrifying new threat, and she will have to dig deep and learn even more about her growing magic if she has any chance of defeating her foes.


Because to secure her throne and ensure her kingdom’s survival, Evie must think like a true Bellonan: she must outsmart and outwit her enemies . . . and crush the king.

Jennifer Estep knows how to not only create some of the very best imaginative worlds out there, but characters who are fierce and brave. Raw and relatable. People you want to know, embrace and hang out with, danger or no danger that seems to constantly haunt them.

She seamlessly knows how to blend realism with fantasy and make something so irresistible and hard to put down, that you never want to leave the worlds you have suddenly become a part of.

I have felt that way about many of her books and series, but with the Crown of Shards series, for whatever reason, I connected with it immediately and never wanted the books to end. Each one is an amazing, action packed adventure with just the right amount of all the good stuff. Romance, danger, magic, food, friendship, deceit, lies, battles to the death, you name it, it has it and then some.

Her latest is no exception to the rule. I adored this. I relished it, I devoured it, I. Wanted. More.

*All thoughts and opinions are my own and were not influenced by the author or publisher. I was not compensated for this review.*
Posted by Kindlemom at 12:00 AM 26 comments:

Review: The Sun Down Motel by Simone St. James


Book Description:
The secrets lurking in a rundown roadside motel ensnare a young woman, just as they did her aunt thirty-five years before, in this new atmospheric suspense novel from the national bestselling and award-winning author of The Broken Girls.


Upstate NY, 1982. Every small town like Fell, New York, has a place like the Sun Down Motel. Some customers are from out of town, passing through on their way to someplace better. Some are locals, trying to hide their secrets. Viv Delaney works as the night clerk to pay for her move to New York City. But something isn't right at the Sun Down, and before long she's determined to uncover all of the secrets hidden…

St. James has quickly become a favorite author of mine with her realistic characters, suspenseful mysteries, and her ability to weave in a slight, sometimes spooky paranormal element to almost all her stories, her books have the perfect blend of genres that are sure to please even the toughest of critics.

*All thoughts and opinions are my own and were not influenced by the author or publisher. I was not compensated for this review.*
Posted by Kindlemom at 12:00 AM 42 comments: