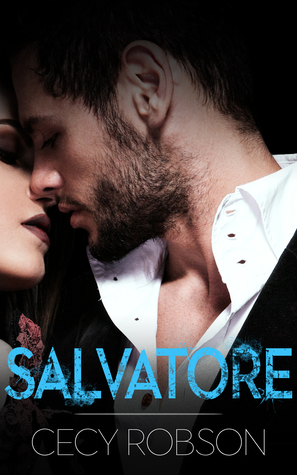 Title: Salvatore
Author: Cecy Robson
Series: Book One in the In Too Far Series
Published: March 13, 2019
Genre: Contemporary
Source: ARC Provided by the Author (in exchange for an honest review)
My Rating: 3.5-4 Stars

Salvatore Romero is a dangerous man. If you’ve lived the life Sal has, rage is to be expected and maybe so is heart. After his father killed his mother in a jealous rage, Sal was left to raise his two younger brothers, becoming a parent long before he was ready.

Desperate for money to support his family, Sal sought help from his old friend, Vincent Maggiano, the son of New Jersey’s top crime boss being groomed to take over his ailing father’s empire.

Aedry isn’t the type of girl Sal is usually drawn to. Her skirts are longer, her hair is tamer, and her heels aren’t clear. But he can’t deny the attraction he feels. And Salvatore’s dark, sexy, and dangerous persona is the exact opposite of the clean-cut business men who usually catch Aedry’s attention.


Neither planned on a life of crime nor did they plan on love. But now, both are in too far.

I hated all the lies and even how Sal acted for a good chunk on the story and I will admit, I was even not rooting for him for part of it. And yet, my weird self couldn't help but like that this gruff dangerous, over aggressive, over alpha male did have a soft spot for Aedry and most of the time, even treated her right.

But did all of that make up for the bad? I honestly, still don't know. I have so many mixed feelings about this book. When Robson said it was dark, she wasn't lying. Nothing about this book except maybe Aedry's relationship with Sal's brothers, is light. Nothing about it is even really good except for the one little thing called love and all the redeeming power said love can have and how very much someone, even a gruff alpha male, will do for it.

So did I love the lies, the deceit, and all the secrets? No, I actually didn't.

But yet, I did love the tender rare moments and the great change that overall, happened to them all along the way and the way that in the end, it did work out and it was a happily ever after.

Did I trust that Cecy would be able to change my mind about what I didn't like into something I did by the time the last page was turned? Why yes, yes, I did.

So while this wasn't a favorite of mine, it was still classic Cecy under all that darkness and deceit and I couldn't help but like the characters in the end and yes, was even rooting for them and that crazy alpha male.