Review: Twice in a Blue Moon by Christina Lauren 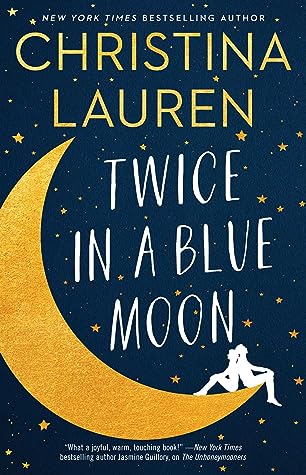 
Book Description:
From the New York Times bestselling author of The Unhoneymooners and the “delectable, moving” (Entertainment Weekly) My Favorite Half-Night Stand comes a modern love story about what happens when your first love reenters your life when you least expect it…

Sam Brandis was Tate Jones’s first: Her first love. Her first everything. Including her first heartbreak.

During a whirlwind two-week vacation abroad, Sam and Tate fell for each other in only the way that first loves do: sharing all of their hopes, dreams, and deepest secrets along the way. Sam was the first, and only, person that Tate—the long-lost daughter of one of the world’s biggest film stars—ever revealed her identity to. So when it became clear her trust was misplaced, her world shattered for good.


Fourteen years later, Tate, now an up-and-coming actress, only thinks about her first love every once in a blue moon. When she steps onto the set of her first big break, he’s the last person she expects to see. Yet here Sam is, the same charming, confident man she knew, but even more alluring than she remembered. Forced to confront the man who betrayed her, Tate must ask herself if it’s possible to do the wrong thing for the right reason… and whether “once in a lifetime” can come around twice.

I don't think I have tried a Christina Lauren book that I haven't either seriously liked or even been a little bit in love with but, every once in awhile I will come along one that really resonates with me for whatever reason. I can have nothing in common with the heroine and know nothing about her situation or world but yet...I feel connected to her. I get her. I understand her and most of all, I feel for her. Tate is one such character.

I know nothing about being an actress or having a famous father or even about her heartbreak but yet, I feel like I know her and she could very well be me simply because I just....get her.

These two authors really do have an amazing ability to bring characters to life. Their situations and experiences to feel real and believable no matter how far fetched or out there they are from our own and for that reason alone, they are authors that you come back to time and time again.