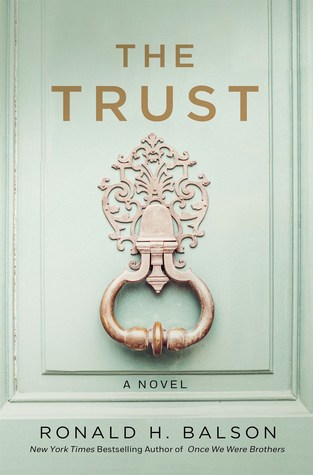 Title: The Trust
Author: Ronald H. Balson
Series: Book Four in the Liam and Catherine Series (but can be read as a stand alone)
Published By: St. Martin's (September 19, 2017)
Source: ARC Provided by the Publisher (in exchange for an honest review)
Genre: Murder Mystery
My Rating: 4 Stars!

Book Description:
The newest novel from the author of Once We Were Brothers finds private investigator Liam Taggart returning to his childhood home for an uncle's funeral, only to discover his death might not have been natural.

When his uncle dies, Liam Taggart reluctantly returns to his childhood home in Northern Ireland for the funeral—a home he left years ago after a bitter confrontation with his family, never to look back. But when he arrives, Liam learns that not only was his uncle shot to death, but that he’d anticipated his own murder: In an astonishing last will and testament, Uncle Fergus has left his entire estate to a secret trust, directing that no distributions be made to any person until the killer is found. Did Fergus know, but refuse to name, his killer? Was this a crime of revenge, a vendetta leftover from Northern Ireland’s bloody sectarian war? After all, the Taggarts were deeply involved in the IRA. Or is it possible that the killer is a family member seeking Fergus’s estate? Otherwise, why postpone distributions to the heirs? Most menacingly, does the killer now have his sights on other family members?


As his investigation draws Liam farther and farther into the past he has abandoned, he realizes he is forced to reopen doors long ago shut and locked. Now, accepting the appointment as sole trustee of the Fergus Taggart Trust, Liam realizes he has stepped into the center of a firestorm.

Five top reasons you should read the Trust by Ronald H. Balson:

1. You love a good setting and what could be better than the lush land of Ireland?
2. Characters that are fleshed out, captivating and completely complex but still down to earth and believable.
3. You love a good murder mystery.
4. You like a little bit of history mixed in with your fiction. I love how this story interwove the mystery of Liam's uncles death and the horrible chaos and strife that still runs rampant through Ireland.
5. You never know what to expect. Just when you think you've learned it all, that all has been revealed, something new surfaces and you feel like you are right back at the beginning of the mystery but in a very good way.

Overall this story was riveting and not at all what I was expecting. I am definitely intrigued to try the others he has written that involve both Liam and his wife Catherine.