If there is one thing you know about me it is that I adore a good historical fiction novel. There is just something about learning about the past while being immersed in a good story that I can't resist. Which is why, I picked this up without hesitation. This time period has always been a favorite of mine and to learn more about it, in an unexpected setting was by far even better.

I'm so excited to be a part of this tour and to be able to tell you more about this wonderfully written story. 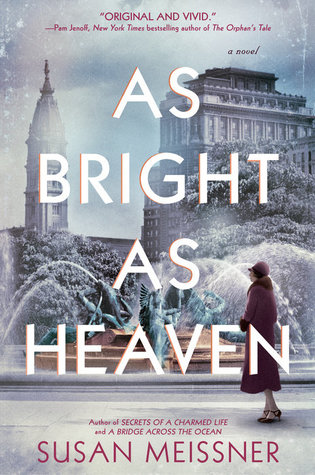 Book Description:
From the acclaimed author of Secrets of a Charmed Life and A Bridge Across the Ocean comes a new novel set in Philadelphia during the Spanish flu epidemic of 1918, which tells the story of a family reborn through loss and love.

In 1918, Philadelphia was a city teeming with promise. Even as its young men went off to fight in the Great War, there were opportunities for a fresh start on its cobblestone streets. Into this bustling town, came Pauline Bright and her husband, filled with hope that they could now give their three daughters—Evelyn, Maggie, and Willa—a chance at a better life.

But just months after they arrive, the Spanish Flu reaches the shores of America. As the pandemic claims more than twelve thousand victims in their adopted city, they find their lives left with a world that looks nothing like the one they knew. But even as they lose loved ones, they take in a baby orphaned by the disease who becomes their single source of hope. Amidst the tragedy and challenges, they learn what they cannot live without—and what they are willing to do about it.

As Bright as Heaven is the compelling story of a mother and her daughters who find themselves in a harsh world not of their making, which will either crush their resolve to survive or purify it.

Susan Meissner was born in San Diego, California, the second of three. She spent her childhood in just two houses.
Her first writings are a laughable collection of oddly worded poems and predictable stories she wrote when she was eight.

She attended Point Loma College in San Diego, and married her husband, Bob, who is now an associate pastor and a chaplain in the Air Force Reserves, in 1980. When she is not working on a new novel, she is directing the small groups ministries at The Church at Rancho Bernardo. She also enjoy teaching workshops on writing and dream-following, spending time with my family, music, reading great books, and traveling.

Beautifully poignant and beautifully written, As Bright As Heaven deals with one families trials and heartache during during a harsh time in American history.  One ripe with a war ending and a deadly disease on the cusp of infecting millions and leaving almost everyone affected by both.

Starting in 1918 and spanning the length of 8 years we get to meet the Brights who from the very first chapter are dealing with a loss no family should have to go through.

This was a beautiful story told through the Bright women of what it means to survive, move on and to overcome the devastating heartache of not only death but of loss and despair.

These four women, each with a unique voice, grow and become stronger as the story progresses and you can't help but admire how they tackle everything that stands in their way and their ability to still smile and most of all, love.

One fans of the time period and historical fans in general don't want to miss out on.