Review: Come From Away by Genevieve Graham 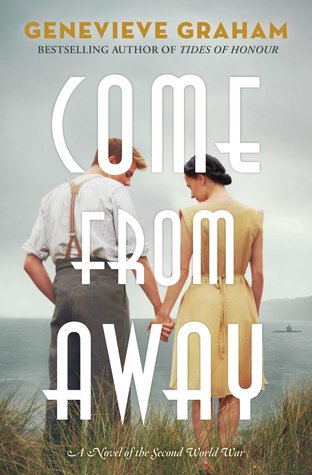 Book Description:
From the bestselling author of Tides of Honour and Promises to Keep comes a poignant novel about a young couple caught on opposite sides of the Second World War.

In the fall of 1939, Grace Baker’s three brothers, sharp and proud in their uniforms, board Canadian ships headed for a faraway war. Grace stays behind, tending to the homefront and the general store that helps keep her small Nova Scotian community running. The war, everyone says, will be over before it starts. But three years later, the fighting rages on and rumours swirl about “wolf packs” of German U-Boats lurking in the deep waters along the shores of East Jeddore, a stone’s throw from Grace’s window. As the harsh realities of war come closer to home, Grace buries herself in her work at the store.

Then, one day, a handsome stranger ventures into the store. He claims to be a trapper come from away, and as Grace gets to know him, she becomes enamoured by his gentle smile and thoughtful ways. But after a several weeks, she discovers that Rudi, her mysterious visitor, is not the lonely outsider he appears to be, but someone else entirely—someone not to be trusted. When a shocking truth about her family forces Grace to question everything she has so strongly believed, she realizes that she and Rudi have more in common than she had thought. And if Grace is to have a chance at love, she must not only choose a side, but take a stand.


Come from Away is a mesmerizing story of love, shifting allegiances, and second chances, set against the tumultuous years of the Second World War.

Come From Away is a poignant beautifully written story about a couple that meet under the worst of circumstances and because of it, their lives and those they know and love, will never be the same again.

Set in Canada during WWII, this story doesn't hold anything back about not only what families went through with their loved ones off at war but what those brave and strong men went through as well, from both sides of the line.

Set in a time when prejudices ran rampant, this story not only takes on the difficult topi of having compassion for our enemies but forgiveness as well.

Wonderfully done and said, this is a story that you aren't likely to forget anytime soon.