Review: The Last Year of the War by Susan Meissner

Title: The Last Year of the War 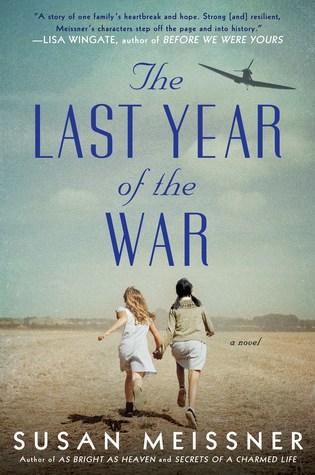 
Book Description:
Elise Sontag is a typical Iowa fourteen-year-old in 1943--aware of the war but distanced from its reach. Then her father, a legal U.S. resident for nearly two decades, is suddenly arrested on suspicion of being a Nazi sympathizer. The family is sent to an internment camp in Texas, where, behind the armed guards and barbed wire, Elise feels stripped of everything beloved and familiar, including her own identity.


The only thing that makes the camp bearable is meeting fellow internee Mariko Inoue, a Japanese-American teen from Los Angeles, whose friendship empowers Elise to believe the life she knew before the war will again be hers. Together in the desert wilderness, Elise and Mariko hold tight the dream of being young American women with a future beyond the fences.

Absolutely breathtaking. Beautifully told and so heartbreaking lovely, The Last Year of the War is a book that will not only open your eyes but touch your soul.

Poignant, heart wrenching, and so very moving, it is a book that I am so very glad I took the time to read.

Meissner has always impressed me with her beautifully written and thought out stories but she truly stunned with this The Last Year of the War.

I can't even begin to explain how touching this story was and how much it both moved and resonated with me.

One I will soon not be forgetting and one I know I will be thinking on for days, weeks, maybe even months after.