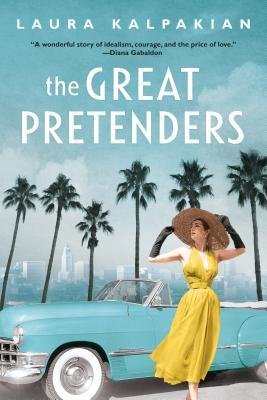 Book Description:
The daughter of Hollywood royalty, Roxanne Granville is used to getting what she wants--even if she has to break the rules. But after a falling-out with her grandfather, a powerful movie mogul, she has to face life on her own for the first time....

Roxanne forges a career unique for women in the 1950s, becoming an agent for hungry young screenwriters. She struggles to be taken seriously by the men who rule Hollywood and who often assume that sexual favors are just a part of doing business. When she sells a script by a blacklisted writer under the name of a willing front man, more exiled writers seek her help. Roxanne wades into a world murky with duplicity and deception, and she can't afford any more risks.

Then she meets Terrence Dexter, a compelling African American journalist unlike anyone she's ever known. Roxanne again breaks the rules, and is quickly swept up in a passionate relationship with very real dangers that could destroy everything she's carefully built.

Roxanne Granville is a woman who bravely defies convention. She won't let men make all the rules, and won't let skin color determine whom she can love. The Great Pretenders is a riveting, emotional novel that resonates in today's world, and reminds us that some things are worth fighting for.

Laura Kalpakian was nominated for the prestigious International IMPAC Dublin Literary Award for American Cookery. She won a National Endowment for the Arts Fellowship, a Pushcart Prize, the Pacific Northwest Booksellers’ Award (twice), the Anahid Award for an American writer of Armenian descent, the PEN West Award, and the Stand International Short Fiction Competition. She has had residencies at the Virginia Center for the Creative Arts, Montalvo Center for the Arts, and Hawthornden Castle in Scotland. She is the author of sixteen novels, and four collections, and over a hundred stories published in collections, anthologies, literary journals and magazines in the USA and the UK.

There is so much history, so much content in The Great Pretenders that is truly enchanting and you can tell that the author spent a lot of time and effort into getting so many world events and Hollywood events right. It really is like taking a step back in time and experiencing it all for yourself through a different perspective.

A time when everything and anything and everyone was judged, tried and prosecuted for the color of their skin, where they lived, how they dressed, what they believed in,  and how much money they had.

Rich in detail, family drama, a Hollywood atmosphere and all the things that go with them all, this was a read unlike any I've read before.


Sometimes troubling, sometimes slow but always interesting, The Great Pretenders is a book that is sure to appeal to many people who love the theme, era, and the setting.