Mini Review: What the Dead Want by Norah Olson 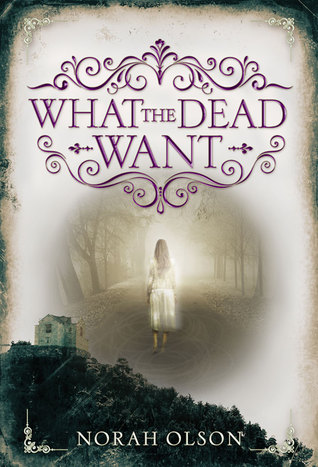 
Book Description:
16 -year-old Gretchen takes photographs to understand the world around her, a passion her mother Mona fostered and encouraged when she was still around. Since her mom disappeared years ago, Gretchen and her dad have lived on their own in New York City, haunted by Mona’s absence.

When Gretchen’s great aunt Esther calls unexpectedly to tell her that she has inherited the pre-Civil War mansion on her mother’s side of the family in upstate New York, Gretchen understands nothing except that her aunt needs her help. But what she finds there is beyond her imagination. The house is crumbling apart, filled with stacks of papers and journals from decades, even centuries past, and it’s crawling with rodents. It’s also full of secrets and a legacy of racism and violence so reprehensible that the ghosts of the past are exacting revenge on the living.


Somehow the mystery of Mona’s disappearance and the atrocities that happened on the land during the Civil War are inextricably intertwined, and it’s up to Gretchen to figure out how…before even more lives are lost.

I was in the mood for something different, fun, and hopefully spooky with just the right amount of paranormal woo hoo and mystery to keep me turning the pages and be on edge.

With a slight creepy undertone and mystery galore, this really was a good read that was different from the norm. A read to take you away for a few hours and give you something with just enough of the creepy factor to keep you on edge and just enough of that mystery that lovers like me crave to keep you entertained and wanting more.

A good read for fans of the genre and those that want to try it for the first time.