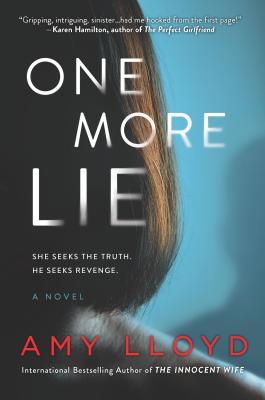 Book Description:
A thrilling new novel of psychological suspense from the award-winning, internationally bestselling author of The Innocent Wife

Charlotte wants to start fresh. She wants to forget her past, forget prison and, most of all, forget Sean. But old habits die hard. Despite the ankle monitor she must wear as part of her parole agreement and frequent visits to her therapist, she soon finds herself sliding back toward the type of behavior that sent her to prison in the first place. The further down that path she goes, however, the closer she gets to the crime that put her in prison all those years ago. And that's the one memory she can't face. Until, one day, Sean tracks her down.

Amy Lloyd won theDaily Mail First Novel competition for her debut, The Innocent Wife. Now she returns with a chilling portrait of a woman trying to be good, even when she isn't sure she wants to be.

Amy Lloyd won the Daily Mail and Penguin Random House First Novel competition in 2016 with her thriller 'The Innocent Wife'.

A fascinating look at how your upbringing can both determine your life and shape it in ways you least expect.

Lloyd's psychological thriller, One More Lie was both interesting and horrific at times. With an unreliable narrator both from, not one, but two point of views, it keeps you on edge guessing who the bad guys are or if the bad guy even exists.

With memory loss, denial, and an upbringing that was less than stellar, both MCs keep you wondering which one is evil and which one was an angel and constantly flipping back and forth between the two.

Slightly slow paced as the story unfolds, it was still a page turner and had me wanting to know all the details and how it would all end. Definitely one that fans of both the author and the genre will flock to and devour.