Today I am so excited to be a part of the Shades of Desire Blog Tour. I fell in love with this series after the first book, Shades of Gray and to be able to help get the word out about this truly fabulous series is an honor.

This is one of those series that you really really shouldn't pass over. It has been a long time since I have found an Urban Fantasy series that I absolutely love and have fun reading too.

A also was lucky enough to talk L.M. to coming here today and doing an interview with me as well, thank you L.M.!!

So without further ado, I bring you Shades of Desire by L.M. Pruitt! 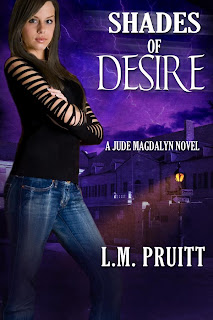 All I wanted was a little peace and quiet.

Instead, I've got dead Covenant members and a steady stream of letters from the new guy in town. His beverage of choice? A 2002 Merlot, with a shot or two of powerful virgin blood.

On top of that, I'm breaking in a new police liaison, failing at playing matchmaker, and fighting nausea like it's a full time job. All I wanted was a little peace and quiet.

Instead, I've got dead Covenant members and a steady stream of letters from the new guy in town. His beverage of choice? A 2002 Merlot, with a shot or two of powerful virgin blood.

On top of that, I'm breaking in a new police liaison, failing at playing matchmaker, and fighting nausea like it's a full time job.

Did I forget to mention that I've also got enough girls living at the Crossroads to start my own boarding school?

Peace and quiet? Out the window.

Book 1 Shades of Gray for your Kindle, in Paperback

Hole in the Wall a Jude Magdalyn free Kindle short

“If someone doesn’t get me a lemon in the next five minutes, everyone will suffer. A lot.”
“Jude, I love you. Which is why I can say you’re being just a little overdramatic.” One look at my face and Theo changed his tune. “But then again, you could say pregnancy is dramatic and you’re just getting into the groove.”
“Nice save.” I tried to sit up again. Halfway through the upward movement greasy waves of nausea rolled over me and I eased back down onto the pillow. Strands of black hair clung to my sweaty face and I closed my eyes, exhaling slowly. “Not as nice as that lemon would be right now, but nice.”
“Elizabeth will be here in a moment. No doubt she’ll have a lemon. And tea. And toast.” Theo turned over to face me, laying one hand over my still mostly flat stomach. If you looked close, you could see the smallest of bumps.
I know, because I checked. Every other day or so.
If anybody told me three months ago, that the week before Halloween, I’d be lying in bed with a man who absolutely adored me—even the crazy parts—I’d have asked them what the hell they were smoking. If they’d thrown in being pregnant, I would have punched them in their jaw. Then gone to the store and bought a dozen pregnancy tests and prayed for them all to be negative.
But that was before the Covenant.
In two weeks, I’d gone from being an orphan raised by nuns, to the latest in a long line of only daughters. Women charged with the protection and well-being of hundreds of people with unique powers. Some made flame burn for hours, while others called the wind to knock you flat on your ass. They were a group of people who came together over two-hundred years ago, bound by a prophecy. One with no past, lost in the present, will bring in the future, through gifts of both this world and the next.
And lucky me, I’d passed the job interview.
I’d sent Hart to a muddy, watery grave-literally. Unless something went crazy wrong, he’d stay under the Mississippi until the Final Judgment. Williams ruled the vampires of the city now and kept his distance as much as possible.
And I, Jude Magdalyn Henries, led the Covenant. Maybe I wasn’t terrific at it. But Gillian would be proud.

All things considered, I think I came out with a pretty good deal. 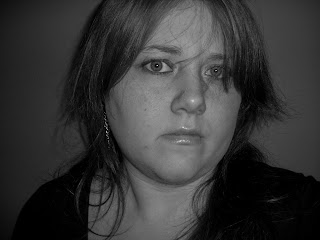 About the Author:
L.M. Pruitt has been reading and writing for as long as she can remember. A native of Florida with a love of New Orleans, she has the uncanny ability to find humor in most things and would probably kill a plastic plant. She is the author of the Jude Magdalyn Series as well as New Moon Rising, featuring Cari Gravier, and Taken, featuring Frankie Post. She is currently at work on the next book in the Moon Rising series, Harvest Moon Rising, due out April 2012. Ms. Pruitt makes her home in Florida with two cats--one smart, the other not so much.

MGO: "Thank you so much for agreeing to be here today L.M., I have to say, I am hooked on your series and am blown away by the writing. When did you first know that you wanted to be a writer?"


L.M.: "I don’t think there was any single moment where the light bulb went on over my head. I always made up stories and wrote them down, but I never thought of making writing a career—too much risk, not enough security. But you can’t really walk away from what you’re meant to do and be, so one day I just decided to go for it. And it’s been one of my best decisions by far."

MGO: "In 10 words or less, tell us who your favorite character to write about was and why?"


L.M.: "Ooh, tough call. The last new book I read was Nora Roberts’s The Witness and I believe all her books are amazing. Possibly my favorite book of all time is Douglas Preston and Lincoln Childs’s The Relic."

MGO: "Favorite movie of all time?"


L.M.: "Dangerous Beauty. It’s based on the life of a Venetian courtesan and is just phenomenal."

MGO: "Werewolf, fairy, witch, vampire or something other?"


L.M.: "I’m working on the next Frankie Post novel, Borrowed, due out mid-September. After that is the fourth Jude Magdalyn book, scheduled for a late October release. And stay tuned for the release of Winged in 2013, the first book in a brand new series."

MGO: "Oh a new series, how exciting!! Once again, thank you so much L.M. for being here today and also for letting me be a part of this Tour and getting to know your wonderful series. It truly has become a favorite and I can't wait to read the third book!"


I got hooked with this series after the first book. I fell in love with Jude's sarcastic witty personality and fabulous one liners. I love how tough and just all around kick butt she is. She has a heart of gold and is always looking out for the underdog. She isn't perfect by any means and she know it and accepts it. She doesn't ever pretend to be someone she isn't and she could give a rat's you know what, if someone has a problem with it.

She has a lot of responsibilities on her shoulders as leader of the Covenant and she somehow takes it all in strides.

The secondary characters in this series are just as good as Jude. Theo, Claire, Elizabeth, Lies, Rian...I can't help but love them all as well. They are all so different yet they all fit together and have become one big, mostly happy, family.

It is hard to say what makes this series so fantastic because there is just so much that makes it fantastic. I laugh out loud throughout the whole book and if I am not laughing I have a great big smile on my face.

This is just so well written. The serious parts are serious and the heartfelt parts grab a hold of your heartstrings and make you teary eyed.

Pruitt knows how to write great memorable characters and create a great world where witches and vamps run wild and magic is always in the air.

I don't want to give anything away but this sequel was even better than the first, filled with fabulous old characters I have learned to love and new ones that are just as memorable as the old ones.

This is such a great fun series. I have already purchased the third book and can't wait to dive into it.


Don't forget to check out the first book in the series, Shades of Gray! 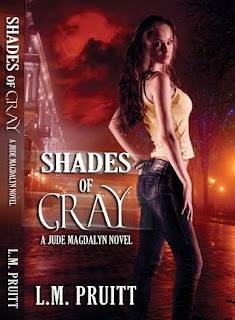 Shades of Gray
Book One
By L.M. Pruitt

Jude Magdalyn Henries lives what many would call an unconventional life.

Orphaned at birth, raised by nuns, a teenage runaway living on the streets... she now earns a living at odd jobs, including one as a fake tarot card reader. Very little about Jude's life appears normal, by any scale.

When she accepts a gig to do a private reading, unconventional takes on an entirely new meaning. Life as she knows it ends when she's thrust into a world she never knew existed-one filled with magic, vampires, and her beloved New Orleans on the verge of an underground war.

To make matters worse, she's got two men in her life vying for attention, Williams and Theo. Both call to a different part of her, but one scares her just a little bit.

Can she step up to the challenges set before her and make the right choices for the greater good?
Posted by Kindlemom at 5:00 AM