The Hallowed Ones Blog Tour, Guest Post and Book Review! 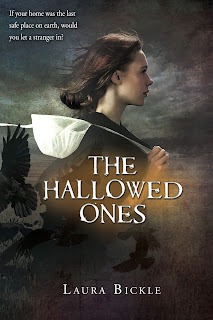 If your home was the last safe place on earth, would you let a stranger in?
In this captivating thriller, an Amish settlement is the last safe haven in a world plagued by an unspeakable horror…
Katie is on the verge of her Rumspringa, the time in Amish life when teenag-ers are free to experience non-Amish culture before officially joining the church. But before Rumspringa arrives, Katie’s safe world starts to crumble. It begins with a fiery helicopter crash in the cornfields, followed by rumors of massive unrest and the disappearance of huge numbers of people all over the world. Something is out there...and it is making a killing.
Unsure why they haven’t yet been attacked, the Amish Elders make a de-cree: No one goes outside their community, and no one is allowed in. But when Katie finds a gravely injured young man lying just outside the bounda-ry of their land, she can’t leave him to die. She refuses to submit to the Elder’s rule and secretly brings the stranger into her community-but what else is she bringing in with him.

Laura Bickle has worked in the unholy trinity of politics, criminology, and technology for several years. She and her chief muse live in the Midwest, owned by four mostly-reformed feral cats.

Her work has been published in Midnight Times, Down in the Cellar, MicroHorror, Theaker's Quarterly Fiction,Ballista , Byzarium, New Myths,a Blog-O-Novella office soap opera for True Office Confessions, and Aoife's Kiss. Her most recent project is the Embers series of urban fantasy novels for Juno-Pocket Books.

She also writes under the name of Alayna Williams.

I tend to hang on to a lot of things. Pictures from vacations. Jeans that I swear that I'll be able to get back into once I lose ten pounds. A prairie skirt that I'm convinced is going to come back in fashion.

But mostly, I hoard words. And word-related things. As a writer, I'm constantly doing research, filing ideas and images in the back of my head. Sometimes, that manifests in the physical world. And an odd collection of things begins to grow at my desk.

First are project notebooks. I keep an old-fashioned paper notebook for each book I write. They're largely illegible, containing scribbled notes and outlines, pasted scraps of articles, and bent photos. But I know where everything is. It gives me a sense of accomplishment to see how I've progressed through the project - all my entries are marked with a date. They are, in their ways, journals, charting the word counts and progress of the project over time.

Next is the inspiring artwork. My desk is made of an old six-panel door placed across a couple of file cabinets. I've covered the top with glass to give me a smooth writing surface that allows me to slip treasures underneath. When I start on a new project,  I change the artwork. Nearly anything can find its way into that collection: Tarot cards, calendar pictures, magazine clippings. They may be silent, but they help inspire words in some way or other.

Finally, there's the tactile debris of the project, strewn across my desk...well, until a cat finds it and absconds with it. This collection is ever-changing. It can include anything from coins to feathers and bits of sea glass. I now have a cluster of clear quartz perched beside my keyboard. I picked it because it reminds me of a setting in my work in progress. I find myself absently stroking it when I edit, like a spiny worry stone. It's holding down a black raven feather that I found in the yard. The feather is occasionally snatched away and mauled by one of my cats, so it's in pretty rough shape. But I still like looking at it.

I know that I'm finishing a story when the desk is full. When I can visualize the world and characters in all their detail, just by flipping through pages or letting my fingers roam over the space. I know the characters' landscape through the miniature diorama on my desk.

There's a certain amount of sadness when a project is finished. I clear out the knickknacks. I take the pictures out from under the glass. I file my tattered notebook on the shelf, take out a crisp new one with unmarked pages and place it on the desk.

It's a blank slate. A new beginning. A little scary.

But then something new catches my eye.

It's an oddly-speckled rock. It looks like an egg.

I place it at the center of my desk. It's the beginning of a new hoard of words.


Alayna Williams (a.k.a. Laura Bickle) has worked in the unholy trinity of politics, criminology, and technology for several years. She lives in the Midwestern U.S. with her chief muse, owned by four mostly-reformed feral cats. Writing as Laura Bickle, she's the author of EMBERS and SPARKS for Pocket - Juno Books. Writing as Alayna Williams, she's the author of DARK ORACLE and ROGUE ORACLE. More info on her urban fantasy and general nerdiness is here: www.salamanderstales.com

The more you know about the future, the more there may be to fear.

Tara Sheridan is the best criminal profiler around - and the most unconventional. Trained as a forensic psychologist, Tara also specializes in Tarot card reading. But she doesn't need her divination skills to realize that the new assignment from her friend and sometime lover, Agent Harry Li, is a dangerous proposition in every way.

Former Cold War operatives, all linked to a top-secret operation tracking the disposal of nuclear weapons in Russia, are disappearing. There are no bodies, and no clues to their whereabouts. Harry suspects a conspiracy to sell arms to the highest bidder. The cards - and Tara's increasingly ominous dreams - suggest something darker. Even as Tara sorts through her feelings for Harry and her fractured relationships with the mysterious order known as Delphi's Daughters, a killer is growing more ruthless by the day. And a nightmare that began decades ago in Chernobyl will reach a terrifying endgame that not even Tara could have foreseen…


I wasn't sure what to expect from The Hallowed Ones. The sweet cover didn't really shout, thriller or even paranormal to me.
Do not let the innocent sweet cover fool you. This book is all that it promises and more.

This isn't your typical book about a dystopian world ruled by vampires. These aren't your fun loving sparkling vamps either. These are serious, blood sucking, glowing red eye, body destroying monsters.

The kind that nightmares are made out of.

I really liked Katie. She was such a strong brave character. I couldn't imagine being in an Amish community like the one she was in and having to make the decision and choices that she did to protect those she loved and to do what was right while risking her whole future. She risked being banned from her community, being shunned and thrown out and still she made the right choices. The compassionate choices.

She didn't want to sit around and watch those she knew and loved make bad choices and put the rest of her community under threat. She has a really good head on her shoulders, I really admired that about her. It couldn't have been easy.

The romance in this one was very subtle, but very sweet all the same. I really liked how it ended. Katie's future was still up in the air and anything was possible but it left it open for a sequel, which I really hope there will be one soon because I would love to read more of her story and to see where she and the others go from here. To see what the Outside world has become.

I don't want to go into too much detail because I don't want to ruin the story for anyone else but if you are looking for something different. For vampires that are evil and bad. For a dystopian unlike others out there right now, then this is one read you really shouldn't miss.