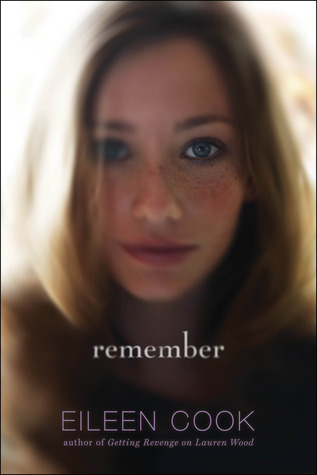 
Book Description:
A thrilling tale about what a girl will do to get back a memory she lost…or remove what she wants to forget.

Harper is used to her family being hounded by protesters. Her father runs the company that trademarked the "Memtex" procedure to wipe away sad memories, and plenty of people think it shouldn't be legal. Then a new demonstrator crosses her path, Neil, who’s as persistent as he is hot. Not that Harper’s noticing, since she already has a boyfriend.

When Harper suffers a loss, she’s shocked her father won’t allow her to get the treatment, so she finds a way to get it without his approval. Soon afterward, she’s plagued with strange symptoms, including hallucinations of a woman who is somehow both a stranger, yet incredibly familiar. Harper begins to wonder if she is delusional, or if these are somehow memories.

Together with Neil, who insists he has his own reasons for needing answers about the real dangers of Memtex, Harper begins her search for the truth. What she finds could uproot all she’s ever believed about her life…

It is so hard for me to resist something that sounds unique. Something that hasn't been done before in the world of YA, which is why when I saw Remember, I just knew I had to try it.

Cook did deliver in the originality department. This was everything I was hoping it would be. Unusual, an edge of mystery, an edge of a romance, and most of all, a fun read that let me get lost in the pages for a couple of hours.

Harper was an interesting character and while I liked her, I wasn't always in love with her choices and decisions. But it was okay because the plot was one that kept you turning the pages and that is what I loved most about this one. I loved the non-stop questions that always popped up and the answers that we did (eventually) get. Nothing was left unsaid or undone.

I admit that there were things that happened that I didn't see coming, lies and betrayals that were hard to swallow. All in all, this was a fun and intriguing read that let me escape into another place and have a great time guessing and questioning everything along the way.