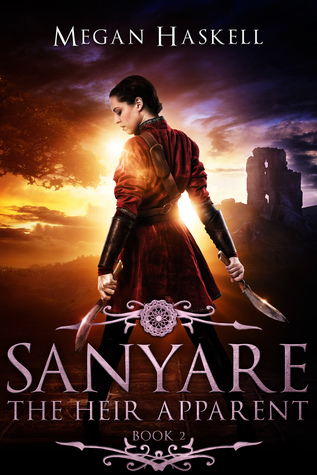 Book Description:
Her secret is unraveling. One dangerous quest could end it all...

Rie thought she was an ordinary human. After she’s named heir to Sanyaro, the truthseeker and mediator of all nine realms, life becomes a lot more complicated. As she struggles to control her magics, Rie nearly falls prey to a brutal assassination attempt during a public ceremony.


Blamed for the chaos, Rie’s escort, Prince Daenor, is taken prisoner. While Sanyaro tempers the political flames, Rie must once again chase after the truth. As if the threat of another great war and the impending death of her lover weren’t enough, Rie uncovers a dark secret that threatens to crack the very foundations of the faerie realms. When allies fall, can Rie overcome the odds… and the opposition?

Having given the first book (and its prequel) a try last year and thoroughly liking it, it didn't take much convincing on the author's part for me to jump right in to reading the sequel. And even though it had been awhile since reading the first book, I was able to quickly immerse myself back into Rie's world and easily fall into the story.

It was nice to see Rie learning more about who she is and her abilities. And while things weren't always easy for her, she slowly but shirley started to come into her own and become stronger in both confidence and in her abilities and relationships with those around her.

The pixies were still very much present which I was glad for because they still remain my very favorite part of this series and it just wouldn't of been the same without them.

With lies, deceptions, and mayhem always on the horizon, I can see many fans of the genre quickly liking and devouring this.