Review: Whispers Beyond the Veil by Jessica Estevao 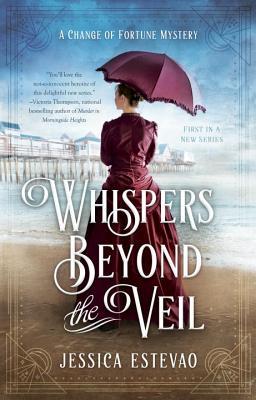 Title: Whispers Beyond the Veil
Author: Jessica Estevao
Series: Book One in the Change of Fortune Series
Published By: Berkley (September 6, 2016)
Source: ARC Copy Provided by the Publisher (in exchange for an honest review)
Genre: Historical Paranormal Mystery
My Rating: 4 Stars!


Book Description:
First in a dazzling new historical mystery series featuring Ruby Proulx, a psychic with a questionable past who suddenly finds her future most uncertain...

Canada, 1898. The only life Ruby Proulx has ever known is that of a nomad, traveling across the country with her snake-oil salesman father. She dreams of taking root somewhere, someday, but, until she can, she makes her way by reading tarot cards. Yet she never imagined her own life would take such a turn...

After one of her father’s medical “miracles” goes deadly wrong, Ruby evades authorities by hiding in the seaside resort town of Old Orchard, Maine, where her estranged Aunt Honoria owns the Hotel Belden, a unique residence that caters to Spiritualists—a place where Ruby should be safe as long as she can keep her dark secret hidden.


But Ruby’s plan begins to crumble after a psychic investigator checks into the hotel and senses Ruby is hiding more than she’s letting on. Now Ruby must do what she can to escape both his attention and Aunt Honoria’s insistence that she has a true gift, before she loses her precious new home and family forever...

I love historical fiction, I always have and when you combine that love of history with a bit of paranormal woo hoo you truly have one fun story that every bit as hard to put down as it was fascinating.

Told in an era of time where spiritualists were seriously becoming popular and just about anything seemed to go, this was a fun tale that not only brought a touch of history to it but was completely entertaining as well with a slight edge of romance and a mystery that will keep you guessing until the end.


This was a great read that was just what I was hoping it would be and left me wanting the next book. I think this will be a really fun series that everyone will love.