Mini Review: The Innkeeper Chronicles Volume One by Ilona Andrews 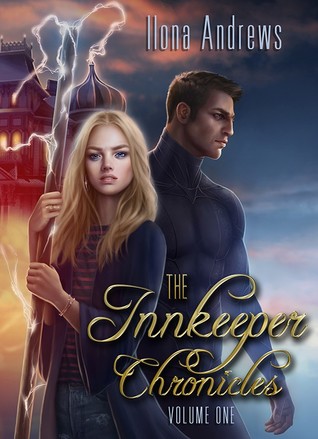 
Book Description:
Meet Dina Demille, a nice Texas gal who runs a seemingly ordinary, quaint B&B.  But Dina’s inn is a magic, thinking entity; her fluffy Shih-tzu, Beast really is a beast; and her guests are the kind that no one on earth is supposed to know about:  guests like a dethroned galactic tyrant with a massive bounty on her head, the Lord Marshal of a powerful vampire clan, and a displaced—and superhot—alpha-strain werewolf.

So don’t expect a normal stay…and don’t stand too close, or you may be collateral damage….

In Clean Sweep, Dina—with the unwanted assistance of newcomer (and alpha werewolf) Sean Evans and Arland, a cosmic vampire soldier—takes on an extraterrestrial killing machine that could destroy her Inn, her neighbors, and everything she holds dear.


One Fell Sweep sends Dina to the galaxy’s worst penal colony to rescue her sister; and back home to fend off a clan of assassins in pursuit, all while saving a guest’s civilization from annihilation…and searching for her missing parents.

Anyone that knows the writing greatness that is the duo Ilona Andrews knows that when you open up on of their stories you are in for a treat.

I am so glad I read these three books as a whole because it would have been so hard to wait until each new one was released and of course, after finishing the third, I'm already anxious for the fourth.

I loved the play on the “traditional” versions of supernatural species with a whole new twist and spin and then the whole sci fi aspect, which admittedly doesn't usually work for me, but so did in this series. I truly had so much fun with it and I want more.