Mini Review: Valley of the Moon by Melanie Gideon 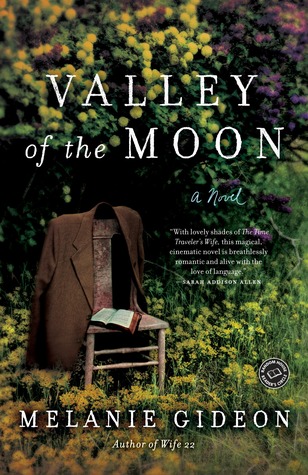 
Book Description:
The author of the critically acclaimed Wife 22 has written a captivating novel about a love that transcends time--perfect for readers of The Time Traveler's Wife, Time and Again, and the novels of Alice Hoffman.
San Francisco, 1975. A single mother, Lux Lysander is overwhelmed, underpaid, and living on the edge of an emotional precipice. When her adored five-year-old son goes away to visit his grandparents, Lux takes a solo trip to Sonoma Valley--a chance to both lose herself and find herself again.
Awakened at midnight, Lux steps outside to see a fog settled over the Sonoma landscape. Wandering toward a point of light in the distance, she emerges into a meadow on a sunny day. There she meets a group of people whose sweetly simple clothing, speech, and manners almost make them seem as if they are from another time.
And then she realizes they are.
Lux has stumbled upon an idyllic community cut off not only from the rest of the world but from time itself. The residents of Greengage tell a stunned and disoriented Lux that they've somehow been marooned in the early twentieth century. Now that she has inexplicably stepped into the past, it is not long before Lux is drawn in by its peace and beauty.
Unlike the people of Greengage, Lux discovers that she is able to come and go. And over the years, Lux finds herself increasingly torn between her two lives. Her beloved son is very much a child of the modern world, but she feels continually pulled back to the only place she has ever truly felt at home.
A gorgeous, original, and deeply moving novel about love and longing and the power that time holds over all of us, Valley of the Moon is unforgettable.

Praise for Valley of the Moon .

A beautifully rich story told through time, both past and present with a love story that isn't your typical love story.

Valley of the Moon was something unexpected, that swept me away into another time, both Lux's present and Lux's past. A story about a strong young women who doesn't quite fit into the time she was born, who is strong and fierce and hard working. A women that will steal your heart as you journey with her not only through time but through her struggles in the modern world and a world that is not her own. As she tries to come to terms with being a women, a mother, and a friend and leaving a man behind that she feels she is destined to be with.

Truly a remarkable story that will keep you turning the pages and wanting more.