Review: Owl and the Electric Samurai by Kristi Charish 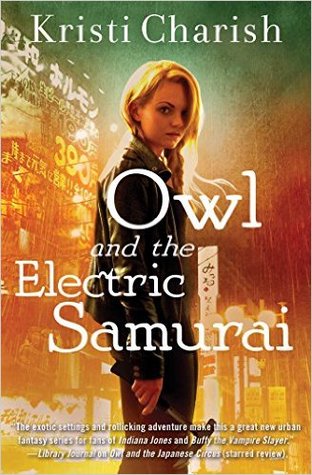 Title: Owl and the Electric Samurai
Author: Kristi Charish
Series: Book Three in the Adventures of Owl Series
Published By: Simon and Schuster (May 8, 2017)
Source: ARC Provided by the Publisher (in exchange for an honest review)
Genre: Fantasy
My Rating: 4 Stars!

The International Archaeology Association (IAA) is responsible for keeping all things supernatural under wraps. They’re also responsible for ruining the promising archaeology career of Alix Hiboux, better known as Owl.

Needless to say, Owl’s still a little sore about that.

Just to keep Owl’s life lively, the IAA has opened a bounty on the two designers of World Quest, the online RPG that is much, much more than it seems. Owl needs to locate the notorious gaming duo before the other mercenaries do. But finding the gamers won’t be easy since every clue points to them hiding out in the legendary lost city of Shangri-La. Not to mention that the last time Owl and the game designers spoke, their conversation didn’t exactly end on the best note…


Meanwhile, undercurrents of supernatural politics are running amok in Tokyo, dragging Owl and her friends into a deadly game of wits with an opponent who calls himself the Electric Samurai. The cost of losing? All-out civil war between two powerful supernatural factions.

Who ever described Owl as a young female Indian Jones was so spot on, so much so that the person deserves a prize. There isn't a better phrase or a better character that comes to mind when I think of this series as a whole. It is just so much stinking fun. And like our beloved hero Indian Jones, you just know that with each new installment an exciting new adventure and outrageous predicaments are just around the corner.

With danger, the odd supernatural, magic, and spells truly lurking in every dark and creepy crevice and cavern she can fin, this story keeps you on edge with one wild adventure after another. With just the right amount of romance to keep it interesting but not taking over the real heart of the story which truly is all about the escapades she can get herself into, and of course out of with the help of a whole lot of friends and friend-enemies a like.

If you have been on the cusp of trying this series, my advice to you is this, step off that edge and do it. Fly face first, feet first, into the non-stop history, adventure, and fun that  inevitably awaits you.

Be prepared though, this one ends on one heck of a cliffhanger. I can't wait for more!