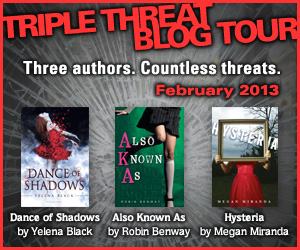 
Book Description:
Mallory killed her boyfriend, Brian. She can't remember the details of that night but everyone knows it was self-defense, so she isn't charged. But Mallory still feels Brian's presence in her life. Is it all in her head? Or is it something more? In desperate need of a fresh start, Mallory is sent to Monroe, a fancy prep school where no one knows her . . . or anything about her past.But the feeling follows her, as do her secrets. Then, one of her new classmates turns up dead. As suspicion falls on Mallory, she must find a way to remember the details of both deadly nights so she can prove her innocence-to herself and others. In another riveting tale of life and death, Megan Miranda's masterful storytelling brings readers along for a ride to the edge of sanity and back again.

About the Author:
Megan is a scientist - turned - teacher - turned - stay-at-home-mom - turned - writer. She is not nearly as indecisive as she sounds. She lives near Charlotte, North Carolina, where she volunteers as an MIT Educational Counselor, does the mom thing by day, and writes by night.Her first novel, FRACTURE, was published in January 2012 by Walker/Bloomsbury. HYSTERIA, a YA psychological thriller, will be published in February 2013. VENGEANCE, a companion/sequel to FRACTURE, will follow in 2014.

My Thoughts and Review:
I really enjoyed Miranda's first novel Fracture so I was pretty excited to read her latest novel Hysteria.

This book was very different, not at all what I was expecting but in a good way. We get flashes back and forth from the past to the present as Mallory tries to remember the night her life changed forever, the night she killed her boyfriend.

I admit, at first, I wasn't sure if I liked Mallory all that much. She was, well slightly strange and self absorbed but all things considered, I think that was acceptable, but more than that, she almost seemed like she didn't want to remember what happened that dreadful night. Not that I can blame her I guess.

She was slightly shallow and did some things I didn't agree with. She let others determine too much the kind of person she was, how she acted and dressed and who she dated. She really wasn't her own person and while I understand peer pressure, it still bothered me.

Even though her personality bothered me and I wasn't sure if I was going to like her at first, I did come to like her over time and I did feel for her. Her parents seemed to completely disconnect from her after the incident and that broke my heart. She really needed them to be there for her, to support her and just be by her side. I was very confused how they could treat her the way they did. Without giving anything away, thankfully that too got better as the story progressed.

I did like how everything was slowly revealed to Mallory. How her memories came back to her in bits and pieces as time went by. I liked the mystery that surrounded it and how you knew things weren't how they seemed on the surface, that there was so much more to it than what little Mallory remembered and what her friends and family told her.

The romance in this one was a little lacking for my taste and there were parts in the story that seemed to drag just a bit but overall I really did enjoy it and I am glad that I read it.

Things didn't quite turn out how I expected them to in the end but that was okay, I was fine with how it all came together.

I think overall I would give this one 3.5 Stars!