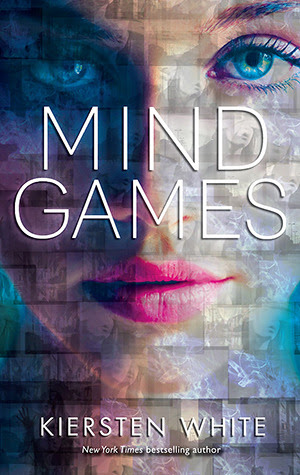 Book Description:
Fia was born with flawless instincts. Her first impulse, her gut feeling, is always exactly right. Her sister, Annie, is blind to the world around her—except when her mind is gripped by strange visions of the future.

Trapped in a school that uses girls with extraordinary powers as tools for corporate espionage, Annie and Fia are forced to choose over and over between using their abilities in twisted, unthinkable ways… or risking each other’s lives by refusing to obey.

This is my first book by Ms. White and I have to say, I absolutely loved it! I couldn't get enough of this.

It was completely kick butt. Fia, was kick butt.
She just might be a new favorite. She is so so broken and flawed and angry but she is also filled with love and even though she doesn't know it yet, hope.

I don't even know how to describe this without giving too much away but White has managed to create an action packed drama filled with twists and horrors and even the paranormal twist to throw you off your game and keep you guessing.

So very much happens. Whoever said this was a little like the Jason Bourne series for teens (or in my case adults) had it right. This was nonstop action, adventure, betrayals, lies, cover ups and left you constantly guessing who you could trust and who you couldn't. Who were the good guys, who were the bad and if good guys even existed because there was a little bit of evil in them all.

I love that this was told in the alternating POVs of both Annie and Fia and that it flashed back and forth from the past to the present. It really gave you a feel not only for Annie and Fia but James, Eden and some of the others as well.

It was cleverly done.

This really is a story that truly stands out in the YA genre. Completely well done and left me itching to get my hands on the next installment.

I definitely will be pushing White's other books up my TBR pile while not so patiently waiting for the next book to come out.

I need more Fia, Annie, Adam and James. Their story is far from over and I have a feeling the adventure for them all, has just begun.
Posted by Kindlemom at 12:00 AM