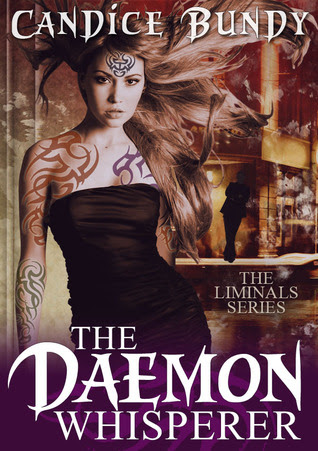 Book Description:
Meriwether Storm discovered the grisly remains of her parents when she was only fourteen—the result of a failed daemon summoning. Meri immediately swore vengeance on the daemon who'd killed her parents, but there was only one problem: she had no idea which one had committed the atrocity. Before their untimely deaths, her parents trained her intensively in the arts, which Meri used to follow in their footsteps, ever seeking the daemon's name. Now, despite her years of searching, she's no closer to the truth and her time is running out.

When a mysterious daemon named Azimuth offers Meri a deadly summoning in exchange for information about her parents’ murderer, she takes it immediately and without intimidation. What does worry her is her attraction to Azimuth: when he touches Meri, her pulse races and she breathlessly awaits the feel of his lips upon her skin. Meri knows she should keep him at arm's length, but her traitorous thoughts obsess over him night and day.

Blinded by her desperation for the truth and her desire for Azimuth, Meri places her trust in the creatures who are her sworn enemy, jeopardizing her need for vengeance. After Meri discovers there's more to the deal than the daemon cabal first promised, can she accept all they have to offer?

When retribution is the only thing that drives you, how much are you willing to sacrifice before you lose yourself to the cause?

The Liminals series is set in a future dystopian Front-Range Colorado filled with daemons, god-touched, and other not quite human creatures. Liminal beings stand at the crossroads between our world and alternate dimensions and have the ability to set things back to rights, if they so choose.

I have to say after reading the first few pages of this one, I wasn't quite sure if this was going to be the read for me.

It was a little gritty and okay, some parts were just down right disgusting to read and had me cringing and thankful I hadn't just eaten but, I hung in there. Morbid curiosity maybe? Masochism? I don't know but either way, I stuck with it and kept on reading.

This was certainly a different read but I caught myself slowly warming up to the world and characters that Bundy created and wanting to find out more about them.

Meri was such an interesting character. Full of wanting revenge for her parent's death but also wanting to be good and do the right thing and help those that really needed helping.

She was a little broken and even though she knew what she wanted out of life when it came to actually living and having a life, she was lost and desperately trying to find her way. When she is thrown into a whole new world, one she knew little about and one she certainly didn't want to be a part of she actually handles it well and handles it like everything else in her life, she moves forward and tries to fix it. But this time, she can't fix it. And so, her story begins.

I wasn't expecting the romance to be so steamy in this either and that sort of threw me too, not that I don't like a good steamy romance but, I don't know. It just took me by surprise I guess. Maybe because it has a little more heat than I was expecting, I think I have read so many YA books lately that I came into this one thinking along those lines, this is definitely not a YA read.

I wish there would have been a little more world building. You really don't get a great feel for what the world Meri is leaving in is like. Instead it focuses more on Meri herself, her new friends and what she is capable of doing and a little of her past.

I am hoping the next book will rectify that a little and give me a little more.

Overall this was a good read though. One very different from ones I have been reading and I would be willing to take a look at the next book and see where the author takes the story next.