Review: The Registry by Shannon Stoker 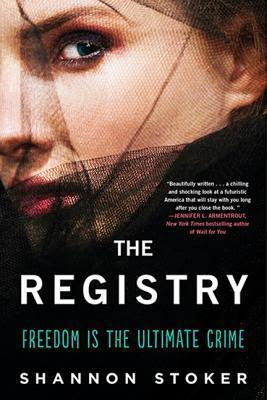 Title: The Registry
Author: Shannon Stoker
Series: Book One
Published By: William Morrow (June 8, 2013)
Source: ARC Copy Provided by the Publisher (in exchange for an honest review)
Genre: YA Dystopian
My Rating: 3.5 Stars!

The Registry saved the country from collapse. But stability has come at a price. In this patriotic new America, girls are raised to be brides, sold at auction to the highest bidder. Boys are raised to be soldiers, trained by the state to fight to their death.

Nearly eighteen, beautiful Mia Morrissey excitedly awaits the beginning of her auction year. But a warning from her married older sister raises dangerous thoughts. Now, instead of going up on the block, Mia is going to escape to Mexico—and the promise of freedom.

All Mia wants is to control her own destiny—a brave and daring choice that will transform her into an enemy of the state, pursued by powerful government agents, ruthless bounty hunters, and a cunning man determined to own her . . . a man who will stop at nothing to get her back.

Do you ever have those reads that while it isn't perfect with either discrepancies, unbelievability or the simple fact that some of it just doesn’t seem 'right” you still can't help but love it because the author's writing manages to suck you into the story and you find yourself eagerly turning the pages to see what happens next? And somehow, because the writing draws you in so much, the little things just stop mattering after awhile and you are able to completely overlook them?

Yeah, this was that read for me. I admit, I had high hopes coming into this one because I had heard the hype about it, I know, I know, never a good thing but, I couldn't help it. I was still excited to read this one, especially after having finished the Delirium series by Oliver (which I completely loved) and I really needed something to fill that void. Not that I was expecting this one to so much as just hoping that maybe it would.

Each new chapter opens up with propaganda from either a magazine or book related to how a boy/husband/soldier is expected to be or the proper behavior for a girl and wife. Even though the articles for females made me want to gnash my teeth and even snarl a little bit, they did actually have a very 50's feel to me. So even though I disliked them, they were actually very believable to me having read articles and advertisements from our own early era in history. Woman were expected to put their husband's wants and needs first before all others, including themselves and children. Where woman were not educated and woman with intelligence and those that spoke out were frowned upon and not valued at all.

And even though I would like to think that our country would never revert back to that time and era of woman not having rights and being made for one use and one use only, I could see it happening. I felt it here in the story and better yet, I believed it possible.

Did I believe all that the author created in this story? No, not at all. But some of it, yes, very much so.

Mia. You know, I am still not sure how I felt about Mia. Parts of me admired her and parts of me really didn't like her at all. Was she spoiled and somewhat of a brat? Very much so. But yet, she was strong and brave (if not naive) and didn't want the life they told her she had to succumb to. She didn't want to be a puppet or trophy with no mind of her own. She wanted freedom and a life worth living where a man didn't rule her in every way possible.

In fact, I actually think I liked the secondary characters in this one much more than the main characters but sometimes, it happens that way.

I had no idea going into this that there would be a sequel and that is probably a good thing because really, we get very little answers about the world Mia lives in and what The Registry really is since it seems much of the people in her life (and really all the females in this story) know very little about it as well.

I really hope the author chooses to explore that more because I really do think there could be a very interesting story there with a lot of twists if she played it right and I would like to see that happen.

While I did get sucked into this story and liked the plot line I really think so much more could have been explained and done with it but I would definitely read the second book to see what happens next.