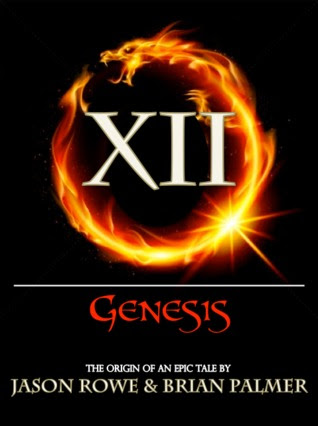 Title: XII Genesis
Author(s): Brian Palmer and Jason Rowe
Series: Book One in the XII Saga
Published: December 12, 2012
Source: Copy Provided by the Authors (in exchange for an honest review)
Genre: YA Fantasy
My Rating: 3.5 to 4 Stars!

A century after the world was predicted to end, it was indeed reborn. Under the leadership of the Overseer of New Earth, minds were united, diseases were cured, and the Earth was healed when population centers minimized mankind’s footprint, and the remainder of the planet was turned over to the will of nature. War was eradicated, the world embraced one religion, and the New Era began.

Six men and six women representing all creeds and colors are supernaturally gifted, but the unlikeliest of heroes. They are barely adults by the world’s standards, but still they are called.

Only they can stand against the growing darkness – but will they stand together?

XII: Genesis is the first installment of an eight-book series in the Young Adult / New Adult genres. If action excites you, if the supernatural intrigues you, and if love compels you - then you are invited to join The Twelve in their fight against the growing darkness that threatens New Earth!

Right from the beginning I could tell this was going to be a truly unique look into a world very well created. The writing was smooth and drew you right into the story.

I do need to say, right off the bat, that high fantasy really isn't my thing and I honestly had no idea going into this one that it would have as much fantasy as it did, maybe stupid on my part but, there you have it either way.

Having said that though, even though this wasn't really my thing per se, I still could tell this story really was very well done. The authors have to be commended for that and I truly think those that love fantasy and want something completely different and original, will really love this read.

There were quite a few twists in this one I didn't see coming and parts were a little, creepy if not horrific. The darkness was truly something to be feared and to fight against and I can't even begin to think how creative the authors must be to even dream up some of the things that they did.

And although this was fantasy there are other elements that I think would appeal to other readers as well, a little mystery, a little romance and some pretty dang tough supernatural kids as well. Really there is a whole cast of fun characters (and some slightly disturbed ones as well) in this that I think will appeal to a lot of people, both male and female, fantasy lovers or not.

This is only part one of an eight part series and I can't even fathom where the authors will take this from here. I am sure whatever it may be, it will be quite the adventure.