Review: You Look Different In Real Life by Jennifer Castle 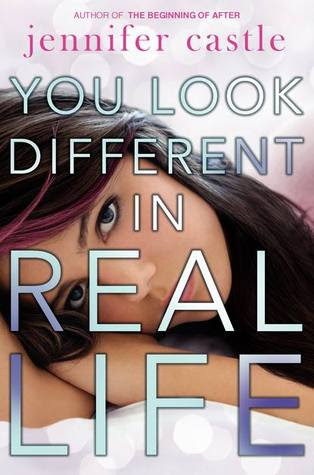 For the rest of the world, the movies are entertainment. For Justine, they're real life.

Now sixteen, Justine doesn't feel like a star anymore. In fact, when she hears the crew has gotten the green light to film Five at Sixteen, all she feels is dread. The kids who shared the same table in kindergarten have become teenagers who hardly know one another. And Justine, who was so funny and edgy in the first two movies, feels like a disappointment.

But these teens have a bond that goes deeper than what's on film. They've all shared the painful details of their lives with countless viewers. They all know how it feels to have fans as well as friends. So when this latest movie gives them the chance to reunite, Justine and her costars are going to take it. Because sometimes, the only way to see yourself is through someone else's eyes.

Smart, fresh, and frequently funny, You Look Different in Real Life is a piercing novel about life in an age where the lines between what's personal and what's public aren't always clear.

This book had such a great premises that I knew as soon as I saw it (and the great cover!) I wanted to read it.

This book is narrated by Justine, the star of the show at both six years old and then again at eleven. She and four other classmates were picked to be documented every five years until the age of twenty one.

Justine has been the favorite, the sweetheart in each episode,  only this time at sixteen, she isn't so sure she will be that person anymore.  So much has changed for her and her friends over the course of five years. She feels like a completely different person, inside and out and she isn't happy with the realization that this time, she will hardly be the star. Her friends have changed, her family has changed, even her once trim and slim body has changed. She doesn't feel like she has accomplished anything she wanted to be or do at age eleven and she isn't really ready for the world to know it.

Even though Justine narrates this story, it really is a story about all five of them. Nate, Felix, Rory and Keira. All of them have changed and they all have their secrets and they all need each other, whether they realize it or not.

I so loved this. It was such a great way to show the characters growth throughout the years and throughout this final documentary of their life. I love how it all played out. The secrets, the heart break, the lessons, the friendship and the love. I don't know what I was expecting from this read but it wasn't the emotional one that I got. I didn't know I would become so invested in their lives and how attached I would be to Justine by the time the story was over.

She is a typical teen that isn't perfect, has made some mistakes, is a little self centered and has a whole lot of growing to do, something she does throughout the story. It was nice to see her change. Not on the outside, but on the inside as she discovers who is really is and what she wants out of life. As she learns that the movies and consequent fame, have not made her who she is but that she and her decisions, good or bad, has made her who she is and will continue to do so.

This was a great story about a difficult time in any youths life, that time when you are on the fringe of adulthood and still trying to find your place in the world.