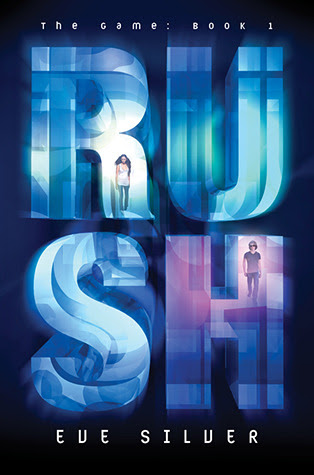 Author: Eve Silver
Series: Book One of the Game Series
Published By: Katherine Tegen (June 11, 2013)
Source: ARC Copy Provided by the Publisher (in exchange for an honest review)
Genre: YA Dystopian
My Rating: 4.5 Stars!

So what’s the game now? This, or the life I used to know?

When Miki Jones is pulled from her life, pulled through time and space into some kind of game—her carefully controlled life spirals into chaos. In the game, she and a team of other teens are sent on missions to eliminate the Drau, terrifying and beautiful alien creatures. There are no practice runs, no training, and no way out. Miki has only the guidance of secretive but maddeningly attractive team leader Jackson Tate, who says the game isn’t really a game, that what Miki and her new teammates do now determines their survival, and the survival of every other person on this planet. She laughs. He doesn’t. And then the game takes a deadly and terrifying turn.

Wow, just wow. This book blew me away with its originality and creativeness. Honestly, I am not a gamer by any means and while I didn't want to be in the game because, yeah, who would? I did want to be in the world that Silver created because lets face it, it was pretty darn cool. Okay, maybe not the alien fighting for your life bit, but the other parts to it? The friendship, the exploring the world and getting to kick some serious alien butt and show off your super ninja skills? Yeah that was pretty awesome.

I don't even know where to begin to describe the awesomeness that is this book. I really really loved it, in fact I would go so far as to say that it enthralled me, from start to finish. Is it perfect? Not by a long shot but it was so entertaining that nothing else mattered. And okay, the cover whore in me has to say, the cover on this kicks some serious booty.

Miki was completely kick butt (like a girl should be). Luka and Jackson, so so swoon worthy, each in there own way and guess what? NO love triangle, you heard that right, nada, zip, zilch, nothing. Okay, there is potential for one all throughout the story, there really is but it never escalates and I really hope it stays that way.

Silver created such a great storyline and characters that it really grabbed my attention and held it the whole way through and to be honest I wasn't expecting to love this. I thought I would like it or I never would have picked it up, but love? Never saw it coming.

And can I talk about that ending? I truly shouted out “Nooooo!!!” when I came to the last page. How could she do that to us. How could she give us so much and then just rip it away and leave us hanging like she did? Silver, that really wasn't nice!

This is the year for outstanding debut authors, series, stand alones, you name it and this is one of them. Okay, I might say that every year but the fact is, Silver is an author to watch because if her other books are anything like her first, she will so be on my auto-buy list before too long.