Review: Fourth Grave Beneath by Feet by Darynda Jones 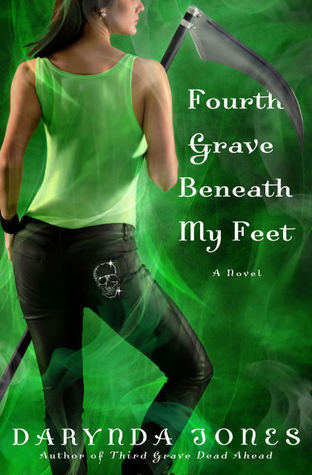 
Book Description:
Welcome to the world of grim reaper extraordinaire Charley Davidson. Try as she might, there’s no avoiding her destiny.
Sometimes being the grim reaper really is, well, grim. And since Charley’s last case went so awry, she has taken a couple of months off to wallow in the wonders of self-pity. But when a woman shows up on her doorstep convinced someone is trying to kill her, Charley has to force herself to rise above...or at least get dressed. It becomes clear something is amiss when everyone the woman knows swears she’s insane. But the more they refute the woman’s story, the more Charley believes it.

In the meantime, the sexy, sultry son of Satan, Reyes Farrow, is out of prison and out of Charley’s life, as per her wishes and several perfectly timed death threats. But his absence has put a serious crimp in her sex life. While there are other things to consider, like the fact that the city of Albuquerque has been taken hostage by an arsonist, Charley is having a difficult time staying away. Especially when it looks like Reyes may be involved.

Just when life was returning to normal, Charley is thrust back into the world of crime, punishment, and the devil in blue jeans in this hilarious fourth installment in the New York Times bestselling series.

Goodness I love this series and I just can't seem to get enough of it, really it is like crack to a druggie good. I find myself thinking about the characters long after I shouldn't be and wondering what if and what abouts and who knows what else while really, I should be concentrating on something else entirely, like quite possibly the other book in front of me, but alas, I'm not. I may have picked up Charley's ADD-ness somewhere along the way.

Dang Charley and her irresistible-ness and Reyes and his hotness. Dang this series! I think it very well may have ruined me for all other UF series (well, ones that I don't already love at least).

I am pretty sure I have said this before but just in case I haven't, Jones is a genius. Truly she packs everything I love in a book, into characters and plots,  into her stories and then she adds a little extra just in case they weren't fabulous enough already.

This book had a different feel than the others, after all that transpired in book three, Charley is bruised battered and a little worse for wear but it doesn't take away from her character or her awesomeness, in fact it adds to it. It makes her feel even more real. Even more alive. She might be a Reaper but she isn't immune to the affects of the world, to harshness, to danger or to death.

I really felt for Charley as she struggled through her injuries, both physical and mental. PTSD is a horrible thing and you could really feel Charley's struggle with it. She isn't use to being vulnerable or really even scared. Her life has been in danger before and she has always come through beautifully but this time was different in so many ways. And not only is she dealing with her injuries but with other things as well.

Charley is finally coming to terms with who she is and what that means as well as recognizing her feelings towards the sexy as all get out Reye. It isn't easy being the son of Satan and it's even harder having a soft spot for him.

Jones once again delivers with a sexy as sin fourth installment in her kick butt series and the girl has me completely and utterly hooked.

This series just gets better and better.