Review: Blood of My Blood by Barry Lyga 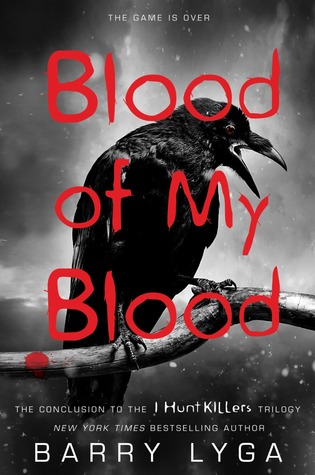 
Book Description:
Jazz Dent has never been closer to catching his father.

Jazz has been shot and left to die in New York. His girlfriend, Connie, is in the clutches of Jazz's monstrous father, Billy--the world's most notorious serial killer. And his best friend, Howie, is bleeding to death on the floor of Jazz's new home.

Somehow, these three must rise above the horrors and find a way to come together in pursuit of Billy.

But then Jazz crosses a line he's never crossed before, and soon the entire country is wondering: "Like father, like son? Who is the true monster?"

From New York City to the small town of Lobo's Nod, the chase is on, and this time, Jazz is the hunted, not the hunter--while Billy Dent lurks in the shadows.

And beyond Billy? Something much, much worse. Prepare to meet...the Crow King.


From acclaimed author Barry Lyga comes the shocking conclusion to the bestselling I Hunt Killer trilogy.

If I was only allowed one adjective to describe this series as a whole, it would have to be intense.

2.
having or showing strong feelings or opinions; extremely earnest or serious.
"an intense young woman, passionate about her art"

Thankfully, I'm not limited to just one adjective because this book, this series, is so much more than that one word.

Riveting, thrilling, captivating, addicting, emotional, terrifying, well written. Truly there are a lot of adjectives that would fit what Lyga created in the I Hunt Killers series and in the final book, Blood of my Blood and all of them would be accurate. I know I've said this in past reviews for book one and two but this series is utterly unique in it's execution and delivery. You feel as if you are in the mind of not only a killer, but a killer's protege as well. Into the mind of a young man who wants to be anything but his father but nonetheless can't help thinking the thoughts, the images, the lessons that were planted and ingrained in his memories, in his very subconscious since he was small child.

And as horrifying as it is, it is also fascinating and yes, addicting to be inside both Jasper and Billy's head.

So many twists. So many secrets and all more horrifying than the next, this was a heart stopping, pulse pounding conclusion to the series and I lapped up very single word of it.