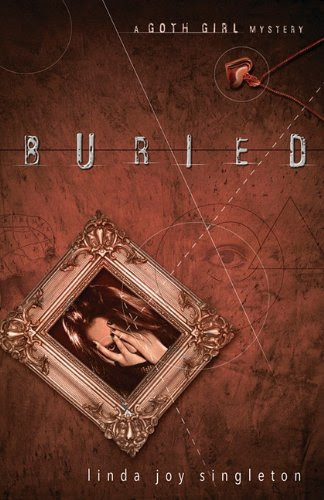 Goodreads Description:
In a new school and determined to keep her secrets from being discovered, Thorn finds a mysterious locket that leads to a shocking discovery—the unmarked grave of a newborn baby. Surrounded by new friends she barely knows, as well as the school’s famous former student, a smoking-hot musician named Phillipe, Thorn must investigate to find out if one of them is a murderer.

I really enjoyed Singleton's Seer series so I knew more than likely I would like this new series as well and I was thrilled to learn that not only would this new series also be paranormal but that it would also feature Thorn, who has made several appearances in the Seer series.
Thorn's also a psychic like Sabine from the Seer series, only instead of seeing ghosts she is a Finder. She has the ability to locate missing items or people by touching something that belonged to them and seeing visions of where they are.
I really enjoyed learning more about Thorn, she was a fabulous secondary character in the Seer series and I am so excited that we will be getting to know more about her.
I love her character. How good she is and loyal and just wants to do the right thing.
I really enjoyed reading about her new home and friends and even getting to know the Grin Reaper, yes you read that right, the Grin Reaper.
This was such a fun read! It was a good mystery with just the right amount of creepy and paranormal to keep you interested and turning the pages to see what would happen next.
I really look forward to reading the next installment to what will more than likely turn out to be a great series.
Posted by Kindlemom at 8:09 PM