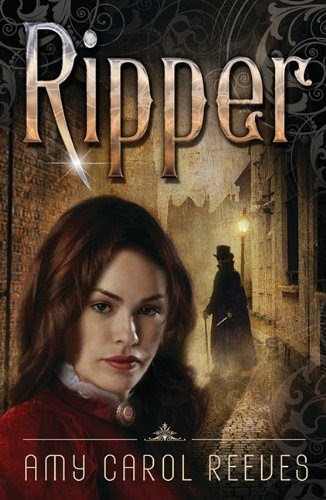 In 1888, following her mother’s sudden death, seventeen-year-old Arabella Sharp goes to live with her grandmother in a posh London neighborhood. At her grandmother’s request, Abbie volunteers at Whitechapel Hospital, where she discovers a passion for helping the unfortunate women and children there.

But within days, female patients begin turning up brutally murdered at the hands of Jack the Ripper. Even more horrifying, Abbie starts having strange visions that lead her straight to the Ripper’s next massacres. As her apparent psychic connection with the twisted killer grows stronger, Abbie is drawn into a deadly mystery involving the murders, her mother’s shadowed past, and a secret brotherhood of immortals—who’ll stop at nothing to lure Abbie into its “humanitarian” aims.
My Review:
I love history, but sadly, only certain parts of history, the 1800's so happen to be part of history that I love.
Why the 1800's? I think because so much happened that affected the world today. So much was discovered, so many cities and towns were built. So many things we invented that changed the world around us then that still effect us today.
I also happen to love the paranormal as is evident in my reading habits. So I knew that combining the 1800's era along with a paranormal element was going to be something great.
Even better, throw in a notorious murderer that was never caught in a country that I also adore reading about, where some of my most favorite authors were born and made and I was super excited to read this book.
Okay, most people probably aren't fascinated with Jack the Ripper and while I wasn't fascinated with him, I mean come on he was a murderer, I was curious about the murders. What the city must have been like then. The fear and terror that the people must have felt. The frustration of the Scotland Yard to not be able to stop him or even catch him.
I mean what kind of man does things like that? What must he be like? How tortured of a soul he must have been. Really I shudder to think about it. The murders were horrific. The crime unthinkable.
I admit, I had to know more. So before starting this book, I did a little research. I wasn't sure how much fact would be in the story and how much of it would be just a story, a paranormal story at that so, I did what I do best. I went online and Googled it. And I will confess, there was a lot I didn't know about the murders. Details that I probably didn't really care to know and really could have lived without knowing if I am being completely honest. But it was good, because I felt like I knew more and armed with all this new information I set out to read what promised to be a very fascinating book.
I was hooked from the first page.
Not because it went right into the story of Jack the Ripper, no, no, nothing like that. I was hooked because the writing was just that good. It drew me in and I felt like I was transported back into that time. Back into that world. The dirty streets of London, the smog, the smells, the colors. I was there. I saw it all through the eyes of Abbie. I knew the people around her. I saw the carriages and buildings and carts. I saw smoke billowing from the factories and heard the noises from the crowd and clip clop of the horses hooves on the pavement. It was enchanting.
And the story just got better from there as we learned about Abbie. About her mother and grandmother. As their mysteries unfolded and Abbie became immersed into the world of the East End and the residents and doctors of the famous WhiteChapel Hospital. As she became a volunteer and worked along side the people. As she got to meet and know the prostitutes that would later become victims to the Ripper.
As the mystery of the Ripper began to unfold and new ones were created.
This story was amazing. There was so much detail, so many facts that were really part of the actual cases and victims that I was amazed because even though parts of this story really happened, this was still a beautifully crafted story that was just that, fiction.
Reeves did a beautiful job bringing together the two worlds and creating something that was outstanding. It was truly hard to put this story down and not read it all at once. I wanted the story to last forever as I turned that pages trying to guess who the Ripper was and trying to learn more about Abbie and her life.
I really really hope there will be a sequel down the road. The author kind of left it open for more and I truly hope it does happen. I know I for one, will be in line waiting for it if there ever is one.
This was an excellent novel from a debut author that I know we will be seeing more of in the future.
Posted by Kindlemom at 7:00 AM