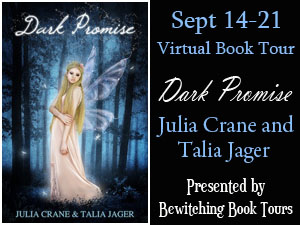 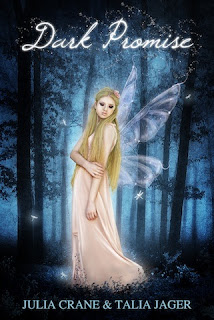 Rylie has it all - great friends, dream boy, loving family. But on the eve of her sixteenth birthday, her perfect little world shatters. A stranger claiming to be her real mother appears with a secret: Rylie is a faery whose powers will be unleashed on her birthday. Captured and forced into a new life, Rylie struggles to keep everything she loves and discovers a terrifying truth: some promises cannot be broken.

When Talia isn’t hiding in the closet from her six children munching on a chocolate bar, she enjoys hiking the red rocks in Utah or sitting on the beach with a Kindle in her hands and her toes in the ocean

Talia has written a number of books for young adults, including Damaged: Natalie’s Story, Teagan’s Story: Her Battle With Epilepsy, If I Die Young, Secret Bloodline, Lost and Found, and The Gifted Teens Series. Connect with Talia online at http://www.taliajager.com

My mother led her into the living room. The lady’s piercing green eyes rested on me, sending a chill down my back. My father followed her gaze. “Rylie, do you know this woman?” Dad asked.
“No.” I shook my head slowly. “I’ve never seen her before.”
“Rylie, maybe you should go to your room,” Dad suggested, his gaze demanding I do as he said.
“No. If this has something to do with me, I want to hear it.” I crossed my arms and sank against the back of the couch.
Mom and Dad exchanged a worried glance, but turned back to the lady on the couch. “Please, go on.”
Without taking her eyes from me, the lady calmly stated, “My name is Azura, and I am Rylie’s birth mother.”
My father, who was always a level-headed man, was on his feet in seconds, his face hard. “What are you talking about?”
I felt like I had fallen into some kind of parallel universe. Did this woman just say she was my birth mother? How could she be my birth mother? That would mean I was adopted, but wouldn’t my parents have told me something like that?
My mother shook her head. “Birth mother? Rylie isn’t adopted.” She reached over and took my hand. “Believe me, I’ll never forget the eleven hours of labor.”
The woman sat perfectly still in the blue armchair across from us, with her hands clasped on her lap. “I know it’s hard to accept, but it’s true. Your daughter died shortly after she was born. I switched the infants. Rylie is mine.”
The wind left me as if I had been punched in the stomach. I couldn’t breathe, and the room spun. I gripped the pillow next to me with my other hand as I clung to my mother.
Silence filled the room for a moment, and then my father exploded. “You need to leave now!” He pointed to the door. “Get out of this house and don’t come back without a court order.”
The lady smiled sincerely, her face still as calm as it had been when she walked in the door. “Please, hear me out. I realize this is a lot to take in.”
“No! This is preposterous! Nobody died. Rylie is ours.” Dad’s voice was like thunder.
I studied the lady. She seemed so honest and soft-spoken. Why would she pretend something like this? Why would she ruin our family if it weren’t true? And if was true, why was she coming clean now? Something in me believed her even though I didn’t want to. I swallowed hard and rubbed my sweaty palms on my shirt.
“Let her talk,” I said hoarsely.
“Rylie, you can’t believe her.” Dad looked stricken.
“I’m curious as to why she thinks I’m her daughter. Let’s hear her out.” I crossed my arms and scooted closer to my mother, comforted when she wrapped an arm around me.
Dad turned back to the woman called Azura, and his frown deepened. “Fine.” He sat back down in his seat and glared. “Talk.”
“Thank you. I’m going to tell you something not many humans know, and I have to trust you to keep it secret for Rylie’s sake.” She addressed the statement to my parents.
Humans? Who talks like that?


I am going to admit something that may shock you, I don't always like books about fairies. In fact there are few books and series about them that I can say I really truly have enjoyed. I have no idea why really other than I have found, that there is only so much you can do with them.

So much that you can say about them to make them original and not start wandering off into the ridiculous.

So it is always with a little apprehension that I start one.

Why do I even bother you may ask? Why put myself through the torture of wading through all the not so great ones to get to one I really like?

The answer is simple really, when I do find the great ones. The ones that hold my attention and suck me into their world and make me believe that fairies do exist? Those ones? Those ones are the ones that make it all worth it.

And thankfully I found one such story in the Dark Promise.

While the story line and theme aren't all that original, they are good. The characters and setting and situations had me immersed right into the thick of it all and I wanted to keep reading. And that is saying something.

I love it when a book can do that to me, because lets face it, they sadly all don't.

Rylie was a great character. I really liked her. She was kick butt exactly but she wasn't a mary jane either.

Adam and Kallan. Ah yes, the two wonderful boys. So hard to choose a favorite between them really. Sometimes I hate it when that happens. It would be nice to have a love triangle for once where I didn't really like them both. Where there was an obvious choice over whom to choose and who to leave in the dust. Sadly, there isn't and I have a feeling that the next book will be a real heart breaker because of it.

Overall this story had some new interesting concepts about light and dark fairies (or rather faeries) and concepts about fairies abilities that I really enjoyed and hope that the next book will go into a little more detail about.

I would really love to see a little more world and character building going on in the next installment.

Overall though I really think this is going to turn out to be a really fun series that I know I will be continuing on with.

Posted by Kindlemom at 1:30 AM