Review: The Truth About You and Me by Amanda Grace

Title: The Truth About You and Me 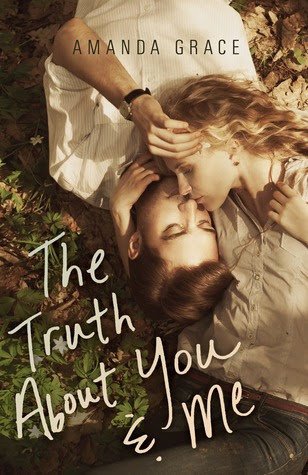 Madelyn Hawkins is super smart. At sixteen, she's so gifted that she can attend college through a special program at her high school. On her first day, she meets Bennet. He's cute, funny, and kind. He understands Madelyn and what she's endured—and missed out on—in order to excel academically and please her parents. Now, for the first time in her life, she's falling in love.

There's only one problem. Bennet is Madelyn's college professor, and he thinks she's eighteen—because she hasn't told him the truth.

The story of their forbidden romance is told in letters that Madelyn writes to Bennet—both a heart-searing ode to their ill-fated love and an apology.

I absolutely love the way the author presented Madelyn and Bennett's story, through a letter written by Madelyn to Bennett. It was brilliantly done.

I couldn't help but feel for Bennett right from the beginning. Not because I thought he was a victim, although in a strange way he was, but because I already knew what the repercussions were going to be for him after being with Madelyn in any capacity, innocent or otherwise. And I couldn't help but feel for him since he didn't know, didn't have, all the facts before he made the decisions he did and before he did the things he did. You could tell he was a great guy and never did anything lightly when it came to his and her relationship. I had to love him for that if not for anything else.

I liked Madelyn too even if she was somewhat deceptive and devious. Yes, she knew her age was an issue and she needed to tell Bennett but at the same time, it really did start out innocent and harmless. I was so torn or whether I felt bad for Madelyn or not. On whether if in some small way she too was a victim. Not from Bennett, no, but from the circumstances of her childhood and the pressures that were placed on her by those around her. Are her parents to blame for what happened? Would this have happened anyways because they were destined to fall in love? Would they have met later on in life? Who knows really. Fate is a funny fickle thing that way. The whatifs could kill you.

I really did love this story, if I am being truthful here, I loved it way more than I thought I would.

It was realistic, it was gritty, it was (at times) romantic and it didn't have an easy way out. The ending wasn't all rainbows and sunshine and even though it left me feeling extremely sad, I loved it for that reason. It was real and it was raw and so very well done.

And while the ending was a sad one, it was also an ending with closure, even without the sunshine and hearts I normally prefer in a story. The author has once again proved to me that she knows what she is doing.