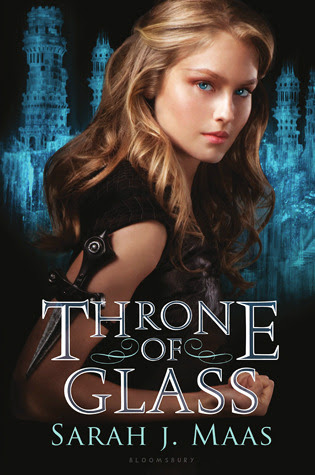 I am so excited to once again bring you something very special as part of the month long Ambassadors Tour for Sarah J. Maas' Throne of Glass series because today I have a very special, very exclusive scene from the series that Sarah wrote just for this tour!

To see all parts of the scene please click on the links below and make sure and check out the other blogs hosting this tour as well because more scenes will be posted every day this week:

The Assassin and the Princess by Sarah J. Maas

Nehemia approached, and Celaena stepped off the small platform. “What sort of story does this dress tell you?” the princess asked in Eyllwe.

Celaena was about to open her mouth, but she caught the direction of Nehemia’s stare: the open back. The black lace did a good job of hiding the gruesomeness of her scars, but this close, it was easy to see the mangled flesh beneath.

Their eyes met, and Celaena switched to Eyllwe as she said, “Do you think I should cover them up?”

Nehemia’s attention again went to the scars beneath the black lace. After a moment, she said, “No.” Celaena turned back to the mirror, but Nehemia spoke again, her voice a bit too calm: “How often do you think about them—about Endovier?”

Celaena met her own reflection in the mirror, the face that, like Kavill’s, was now familiar and foreign. “Every day. Every hour.”

It was a truth she hadn’t admitted to anyone—perhaps even to herself until now.

“Would you free them if you could?”

Celaena snapped her head to the princess. “What kind of a question is that? Of course I would.”

They had sworn—both sworn this morning—that they wouldn’t have this kind of talk. And Celaena knew precisely where this conversation would go: into Nehemia talking about slavery, the empire, the need for good people to stand and fight.

Kavill and Marta were doing their best to look busy at the counter in the rear of the front room. Kavill’s eyes lifted from his ledger, and when her gaze met his, she realized that he knew.

He knew exactly who she was, and perhaps always had. She didn’t know why, but it made her…sad. Surprisingly, absurdly sad.

She looked back to the princess, who gave a forced smile. “I should not have mentioned it,” Nehemia said. “Today is for fun—for just being young women.”

And for some reason, seeing that forced smile just made the weight in her chest sink a little deeper.


Continue reading this scene at So Many Books, So Little Time tomorrow!
Posted by Kindlemom at 9:00 AM