Don't forget to check out today's stops for the Something Wicked Tour!

Candace@Candace's Book Blog: Cat Winters: In the Shadow of Blackbirds

And tomorrow look for:

Candace@Candace's Book Blog: April Tucholke: Between the Devil and the
Deep Blue Sea 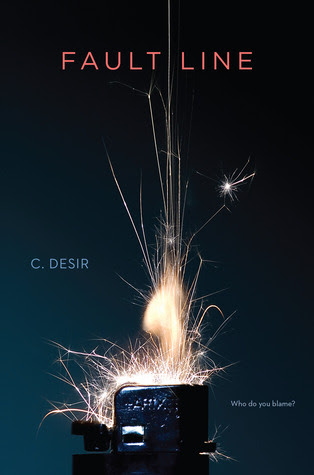 Book Description:
Ben could date anyone he wants, but he only has eyes for the new girl — sarcastic free-spirit, Ani. Luckily for Ben, Ani wants him too. She’s everything Ben could ever imagine. Everything he could ever want.

But that all changes after the party. The one Ben misses. The one Ani goes to alone.

Now Ani isn’t the girl she used to be, and Ben can’t sort out the truth from the lies. What really happened, and who is to blame?

Ben wants to help her, but she refuses to be helped. The more she pushes Ben away, the more he wonders if there’s anything he can do to save the girl he loves.

My Thoughts and Review:
This is a hard book to review. Not because I don't know how I feel about it necessarily or even because I don't know what to say. More than anything it is because the subject matter was so sensitive, so sad and so upsetting that it is hard to express everything that I want to without saying too much or too little. Even now, as I am writing this, I have no idea how many stars I will eventually give it. I can only hope that after I get it all out there, I will figure it out.

I applaud an author that ever even tries to breech subject matters like these. It can't be easy, not to research to write or breath life into, it just can't.

The romance in this was very fast paced, maybe a little too much so but then again, with the age of the characters it was also realistically done. How many of us didn't fall hard at fast at one time or another as a teenager? How many of us didn't make stupid rash decisions, some that changed our lives forever and other that maybe changed someone else?

This read is gritty, realistic and sometimes hard to get through because of the sheer darkness of it and of course because of the subject matter. It was hard seeing Ani self destruct the way she did. To see her put herself through what she did and those that loved her. She pushed them away and became almost cruel about it.

I have no idea how realistic all of Ani's actions were with what she was faced with, but I can imagine they were more realistic than I would care to think about or admit.

This really did break my heart and leave me feeling sad. I understood the ending but didn't understand why it had to be as open ended as it was. I felt sorry for everyone involved in the whole situation and realized at the end, that no one won. No one pulled through for the better. There was no happily ever after. But hopefully they was a new beginning. Hopefully there was help and most importantly hope.