This series really couldn't be more perfect for this hop if I tried. I LOVE LOVE this series. If you haven't tried it yet you really are missing out!

Today's stops look like another fun filled day, don't forget to go check them out: 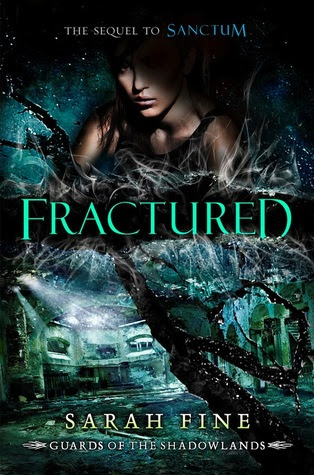 Author: Sarah Fine
Series: Book Two in the Guards of the Shadowlands Series
Published By: Skyscape (October 29, 2013)
Source: ARC Copy Provided by the Publisher (in exchange for an honest review)
Genre: YA Fantasy
My Rating: 5 Stars!

Book Description:
In the week since Lela returned to Rhode Island as Captain of the Guard with Malachi as her second in command, local news has been dominated by chilling sightings of human-like creatures running on all fours. Lela knows there’s only one explanation: the Mazikin have arrived in the land of the living.

Needing to maintain the appearance of a normal life for her foster mother, her probation officer, and her classmates, Lela returns to Warwick High along with Malachi. At night they secretly hunt for the Mazikin nest. To assist, two new Guards from very different parts of the Shadowlands are assigned to Lela’s unit, including the bad boy Jim, who repeatedly challenges Lela's authority. Lela struggles to keep all her Guards on the right side of the law, but their mistakes come at a terrible cost.

As one painful revelation follows another and the Mazikin start targeting those closest to her, Lela finds herself more vulnerable than she’s ever been, wanting a future more than she ever has. With an enemy determined to separate soul from body, one question remains: how much is she willing to sacrifice to protect those she loves?


My Thoughts and Review:
I adore this series. I wasn't too sure about it at first, if I am being completely honest Sanctum had to win me over, but win me over it completely did. I couldn't help but not fall in love with the dark gritty world she created and the characters, equally desolate and equally as wonderful as well.

I mean, I dare anyone not to fall in love with Malachi. With his loyalty, his strength, his selflessness, his honor and his gentleness. I think it would be virtually impossible not to at least feel something for the tall dark and handsome man that won Lela over, heart and soul.

Fine created a world so rich in detail and utterly fascinating that it was hard not to get caught up in it. To not feel like you where there with them as a part of the dark and bleak world she created. A world that was filled with little hope and no love at all, at least until Lela and Malachi met and together made it better, together became better. Together became whole.

Needless to say, I was excited to start Fractured, to know what was in store for them and to get thrown back into their world and their new life and come on, isn't the cover on this gorgeous?

While this isn't as dark as Sanctum, nor as depressing, it isn't a happy sunshine and rainbows type of read either. In fact, I think I may have felt  more while reading this than I did the first. I didn't want any obstacles to be in the way for Lela and Malachi and really, I should have known better. How could such a dark read turn into something light? Turns out, it can't and it doesn't.

There are struggles and trials and hardships and lots of them. For Lela, for Malachi and for their new guard and friends. No one is safe and no one is exempt from the harshness that has become Lela's new job and world.

Lela had become so strong, so fierce and I loved watching her grow in every way possible.

I would be lying if I said parts of this didn't make me mad, didn't break my heart and even make me a little sad. Ms. Fine threw in curves and twists I really had anticipated and she almost made me want to throw my book against the wall like a toddler throwing a fit because the book wasn't going the way I wanted it to. Where was the happiness I wanted? Why in the world did it have to end the way it did? It was cruel and unkind and..and..I just can not wait for the next book to be out. In fact, I am going to have a really hard time picking up anything else because I can already tell the whole book will be running through my mind for the next few days.


Ms. Fine, once again you have shown me what an incredibly great storyteller you are, no matter how upset I am at you right now for that horrific ending, I can not deny that you have talent and know how to draw me into your world and hold me captive.