Something Wicked Returns With Guest Post and Giveaway From Author Susannah Sandlin!

For those of you that don't know Susannah I have to say, it is a huge shame because not only is she one of the sweetest people I have ever talked to on the internet but she is one hell of a writer as well. 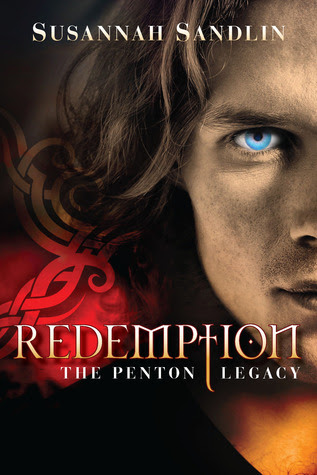 The fourth book in the series will be out in May and in honor of that she shared a special guest post with us that is all about the boys of Penton. And if that wasn't already fabulous enough, she so generously offered up a book of the winner's choose from her series! And if you already have all her books (because, hello, they are fabulous!) then you can pick some awesome swag instead. How cool is that?


Don't forget to check out today's other stop for the tour along the way!
Heidi@Rainy Day Ramblings: Fiona Paul: Belladonna

And those over the next few days!

Heidi@Rainy Day Ramblings:April Tucholke: Between the Devil and the
Deep Blue Sea


But first let me introduce you to the first book in her series, Redemption. And also a little bit about Susannah as well.

Book Description:
For vampire Aidan Murphy, life has never been so desperate. The vaccine used to treat a global pandemic has rendered human blood deadly to his kind, leaving them on the brink of starvation and civil war.

In tiny Penton, Alabama, Aidan establishes a peaceful community of vampires and unvaccinated human donors. He dares to hope they can survive—until his estranged brother descends upon Penton and begins killing the humans. Determined to save his town, Aidan kidnaps an unsuspecting human doctor—and finds himself falling in love for the first time in nearly four centuries.

Dr. Krystal Harris thought she was coming to Penton for a job interview, but Aidan Murphy has other plans. Infuriated by his high-handed scheme to imprison her in the small town, Krys can't ignore the attraction between them. But is it love? Or does her dangerous, charismatic captor want only to bend her to his will? 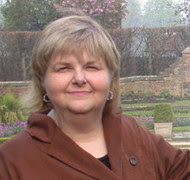 Susannah Sandlin is the author of paranormal romance set in the Deep South, where there are always things that go bump in the night! A journalist by day, Susannah grew up in Alabama reading the gothic novels of Susan Howatch, and always fancied herself living in Cornwall (although she’s never actually been there). Details, details. She also is a fan of Stephen King. The combination of Howatch and King probably explains a lot. Currently a resident of Auburn, Alabama, Susannah has also lived in Illinois, Texas, California, and Louisiana. Her novel Redemption won the paranormal romance category in the 2011 Chicago North RWA Fire and Ice contest, and is the first of three in a series that debuts this year.

I have a vampire paranormal romance series, The Penton Legacy, filled with sexy vampires, evil geniuses, evil idiots (why, of course there are evil idiots!), damaged heroes, and the people who love them. They all live in the unlikely hamlet of Penton, Alabama, in an old, abandoned cotton mill town that master vampire Aidan Murphy bought up for his fanged followers and their willingly bonded humans.

(The real Penton, Alabama, lies about thirty miles from me, near the Alabama-Georgia state line—wouldn’t the locals be shocked to know about their vampalicious neighbors?)

Then I destroyed their world. Not only were vampires starving because a pandemic vaccine poisoned the blood of vaccinated humans, but the vampire leaders were corrupt old SOBs who wanted to tear down what Aidan had built. So they did. They burned Penton down. They set off bombs. They killed people.

And yet Penton is trying to survive and rebuild. So I’ve found myself as I write the fourth book of the series (coming next May!), thinking about how the town of Penton might logically move forward. The starvation and unrest within the vampire world continues to grow, and the solutions that have been devised so far haven’t yielded results as fast as people had hoped.

The Penton vampires needed help, I decided, and who better to lend assistance than some of the characters from Storm Force, a standalone book written in the same world and published this past summer? Storm Force is about a counterterrorism team of human Army Rangers and shape-shifters that was formed in part by Aidan Murphy from the Penton series. Why not a little quid pro quo?

Partially combining the casts of these two books has given me a chance to bring two of my all-time favorite characters face to face. And oh-em-gee, wouldn’t you like to know the first thing Robin Ashton says to Mirren Kincaid?

So let’s have a face-off. In the battle of Mirren versus Robin, vampire versus shifter, who’s your money on?

Robin Ashton is a waif of a girl, barely over five feet tall, wiry and wicked. She has a mouth that would make a sailor cringe and isn’t exactly known for her tact. In fact, she’s impatient, sarcastic, and has absolutely no filter between brain and mouth. (She’s also incredibly loyal and protective.) She’s able to shift into a golden eagle and is not only shifter strong but, in her bird form, an excellent tracker. She has a kind of undefined sexual relationship with her Omega teammate Nik Dimitrou.

Mirren Kincaid is a bear of a vampire warrior, six-eight, muscular, and fond of beheading enemies with his sword Faolain (which he has kept, along with his chain mail and battle ax, since his human days as a galloglass warrior in medieval Scotland). Mirren is, to put it bluntly, a foul-mouthed grouch. And he has a brutal side, having worked first as a mercenary and then as an executioner for the vampire tribunal. Now he’s gone straight and heads up security in Penton. But Mirren is not an easy man, and he is a bitter enemy to have. His mate is Gloriana Cummings, and only Glory can truly handle the man she simply calls “vampire.”

I will say up front, to those of you who might be familiar with the series, that this is British vampire Cage Reynolds’ book, and there will be NO romantic overtones between Mirren and Robin. None. Nada. Cage? Well, Cage is in WAY over his head.

Leave a comment for a chance to win your choice of the Penton Legacy books (Redemption, Absolution, Omega) or Storm Force. If you already have them, you can request an author swag pack instead!

Giveaway:
Winner's choice of any one e-book from the Penton Legacy Series (open internationally)