Something Wicked Returns: Character Interview and Giveaway With Author Linda Grimes and Her Series, In a Fix!

I don't even know where to begin to tell you how much I love Linda and her series, In a Fix. It is just so much fun. I fell in love after the first book, the humor, the action, the wonderful characters, truly this is a must read for an UF fan. It is rare I fall in love with a series after only the first book but I did and the best part is, the second book, Quick Fix, was even better!

After much begging and pleading (on my part) Linda agreed to be here today and share a fun interview with her main character Ciel. Okay okay, maybe I didn't really have to plead because, after all, Linda is super sweet but it was awesome of her to agree to let Ciel come here today so, with out further ado, I give you Quick Fix and my interview with the fun spunky Ciel!

Also don't forget to check out the other stops today on the tour and those scheduled for tomorrow.

Heidi@Rainy Day Ramblings:April Tucholke: Between the Devil and the 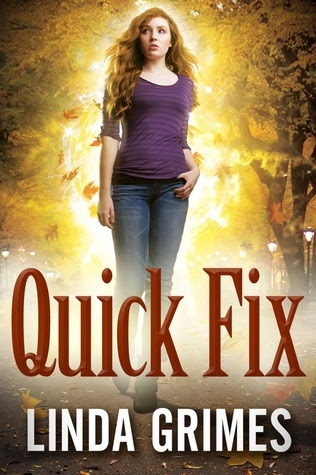 Molly has already begun to show signs of being an adaptor herself. She's young for it, but she's always been precocious, so it's not impossible. What is impossible is her taking on the form of the baby orangutan she touches — adaptors can only project human auras. Until now, apparently. Worse, Molly is stuck in ape form. She can't change herself back.

Escaping from the zoo with their new baby orang, Ciel and Billy head for NYC and the only person they know can help: Ciel's brother James, a non-adaptor scientist who's determined to crack the aura adaptor genetic code. But when Billy winds up in jail, accused of attempted murder, Ciel begins to suspect Molly's unusual adapting ability is more than just a fluke. Who's been experimenting on Molly, and what do they hope to gain? And will Ciel survive to find out? 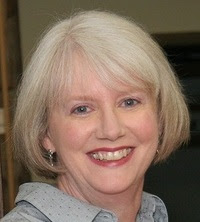 Linda grew up in Texas, where she rode horses, embarrassed herself onstage a lot, and taught teenagers they’d have to learn the rules of English before they could get away with breaking them for creativity’s sake. She currently resides in Virginia with her husband, whom she snagged after he saw her in a musical number at the now defunct Melodrama Theater in San Antonio. (There’s nothing like a rousing chorus of “If You Wanna Catch a Fish You Gotta Wiggle Your Bait” to hook a man for a lifetime.)Like IN A FIX's globetrotting main character, aura adaptor Ciel Halligan, Linda has spent her fair share of time overseas, though fortunately under less stressful circumstances. Kidnapping and daring rescues are all well and good in fiction, but she prefers sanity in her real life.

MGO: Thank you so much for being here today Ciel, I am so excited that Linda agreed to let me interview you!
Okay, easy question first, what is the best thing about being an adaptor?

Ciel: Are you kidding me? The best thing is obviously making those awkward zits--the kind that pop up right before a big event--disappear like magic.
Okay, okay...maybe that's not the best thing, but it's definitely one of the perks, along with adapting away dark circles under your eyes, so nosy relatives don't know you haven't been getting enough sleep.
But I suppose the absolute best thing about being an adaptor is that you can hide in plain sight. There are times when it's not convenient--or comfortable--to be yourself. When you're an adaptor, you can always be somebody else for a while. Plus, if you ever get tired of seeing the same ol', same ol' in the mirror...well, you don't have to!

MGO: I have to admit, that would be a handy thing to be able to do. I think I would use that at least once a week!

Who was the first person you ever “changed” into?

Ciel: Oh, geez, was that ever humiliating. It was Billy Doyle. Our families were vacationing at the lake house (which belonged to my parents then, but is now one of my client hideaways), and Billy was rubbing it in that he was already able to adapt for short periods of time. The adaptor gene is dormant until puberty, which is about the most embarrassing period in anyone's life anyway, and Billy hitting it first didn't help my ego at all. So I reached out to wipe the annoying grin off his face and was shocked to see it was Billy's hand I drew back after touching him. I ran to the nearest mirror and, for the first time, saw a face that wasn't mine reflected back at me.
Billy cracked up. Told me it was the best I'd ever looked in my life, that I'd probably always secretly wanted to be him instead of a scrawny, freckle-faced girl, yadda yadda yadda. Whereupon I slugged him (possibly more than once) while asking him, repeatedly, why he was hitting himself. (Hey, it was funny at the time.) The only way he could get me to stop was by morphing into me--I was naturally reluctant to strike my own face.
And that's when our moms caught us. They pulled us apart and gave us the world's longest lecture on the responsibilities that come along with being an aura adaptor, number one being that you never, ever borrow another adaptor's aura without their express permission. It's something that Just Is Not Done.
So, yeah, I totally broke the rules my first time out. Swift, huh?

Okay you ready for the tougher question? There is a love triangle of sorts in In A Fix and then again (for the most part) in Quick Fix. You have two very wonderful passionate men vying for your attention, tell me, what is the best thing about each of them and what drew you to both?

Ciel: Let's start with Mark, since I've been crushing on him since I was thirteen. Aside from the obvious--his hunkier-than-hunky looks--he's also got a save-the-world hero complex that makes him irresistable. I imprinted on him as soon as puberty hit me with the hormone stick. Only, now that he might actually be starting to return the interest...well, to be honest, it's kind of freaking me out. It's like being told, as a kid, that yes, you do have permission to eat the most ridiculously ginormous ice cream sundae on the menu. In fact, have two! The temptation is there--and strong--but you start to wonder if it's wise to follow through. I mean, it could be great with Mark...or it could be one of those "be careful what you wish for, because you might get it" situations. He's an intense guy, maybe more so than I'm equipped to deal with.

Billy, on the other hand...well, heck if I can explain what we have going on. We were best frenemies for-freaking-ever, and then boom! His teasing became teasing, if you catch my meaning. Whoa. That threw me for a loop. Sure, I'd always recognized, in a detached sort of way, that he's gorgeous. I saw the effect he had on countless other women. But we were always just buddies, bickering and laughing together. That's the best thing about him--he can always make me laugh. And then...something changed. As soon as he zeroed in on me romantically, I found out I wasn't quite as immune to the legendary Doyle charm as I thought I was. Gotta tell you, it's confusing as hell to think you might be falling in love (not to mention lust) with your best friend.

MGO: Who is your favorite family member and why?

Ciel: That's tough--I love all my family members, every last exasperating one of them, including those who aren't technically family. But if I have to choose, I am rather partial to Billy's little sister, Molly. She's smart, sweet, and adorably effervescent. Also, she's the only one in the whole clan who's shorter than I am. (For now, at least.) I like that about her.

MGO: So we all know you're an adaptor, which of course means you can alter your appearance whenever you want. Is there something you alter (even slightly) about yourself now that you don't reveal to anyone? If so, willing to tell us what?

Ciel: I do fudge on my freckles sometimes, when I'm especially tired of being told I'm "cute." And I've been known to add an inch or two of height--being short can get annoying. I'd go for bigger boobs, but no one who knows the real me would believe they were real anyway, so why bother?

MGO: So tell us about this Linda lady, what do you think about her?

Ciel: Who? Oh, you mean that wacky woman who thinks she created me? Ha. She can be amusing, but if she really believes she's controlling me and the rest of my pals, she's delusional. I keep her apprised of what I'm up to, but only as a courtesy. It keeps her happy.

MGO: *looks around* I hope Linda doesn't read this!
What do you think she has in store for you and the guys in the next book?

Ciel: Sorry, I've been sworn to secrecy. But here's a hint: Hooray for Hollywood! Oh, and hooray for the hayloft, too. Especially the hayloft. *sighs*

MGO: Hmmm, Hollywood and haylofts huh? well, either way I can't wait for the next adventure!
Thank you so much for being here with us today Ciel and letting us know a little more about yourself.

Ciel: Thank you for inviting me!

The wonderful people at Tor have very generously offered up a paperback copy of Quick Fix to one lucky (US) winner!

Thank you so much!!