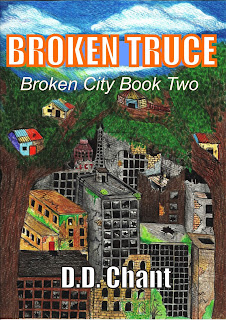 Life isn't turning out the way that Deeta thought it would. With the Lewises defeated and peace between the tribes, she'd believed that the dark times were in past.
However troubles between the tribes continue, and the Andak council has selected Tom as their ambassador and chief spokesman to the other tribes.
Deeta knows that there is still much resentment against the Andak, and that Tom is in danger every time he leaves the safety of Andak city.
Struggling with her own complicated feelings against the tribe that she is now a part of, Deeta tries to ignore the changing attitudes growing within her.
Then Tom is betrayed, and with the whole City thrown into great danger, Deeta finds that reality can't be ignored forever...

My name is Dee Dee, I’m twenty six and I live in a beautiful part of Devon, England with my family. I have a younger sister, Amy who is a brilliant guitar player, some chickens, Duck, geese, pheasants, a cat (that adopted us when we moved in!!!) and some Koi.
Broken City is actually my second novel. My first, as my Aunt so delicately put it, was crazy but in my defence I was only sixteen at the time. On the plus side I learnt a lot (or so I hope) and two years later ‘Broken City’ was finished. Due to the support I have received from everyone I have just started work on the next in the Broken City series!
I have written another book ‘The Promise’, which is set in Saxon England it’s the beginning of a series and I have just released my third book 'Fracture' which is set in the distant future and is also the start of a series.
I really hope you enjoy reading my books as much as I enjoy writing them.
I love reading and have a kindle: I read almost anything with adventure and romance in it! I also like to cook and wear impractical high heels!!! And as you might have noticed I have a horrible addiction to exclamation marks!!!