Review: The Replaced by Kimberly Derting 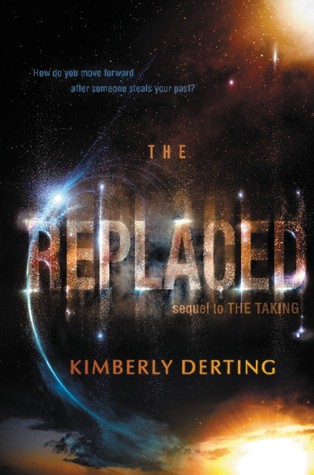 
Book Description:
Romantic and action-packed, The Replaced is the gripping second installment in the Taking trilogy.

Kyra hasn't been the same since she returned from her mysterious five-year disappearance. Now, on the run from the NSA, Kyra is forced to hide out with others who, like her, have been Returned. Yet she is determined to find Tyler, the boy she loves who was also abducted—all because of her. When her group intercepts a message that Tyler might still be alive but is in the hands of a shadowy government organization that experiments on the Returned, Kyra knows it's a risk to go after him. What if it's a trap? And worse, what if the returned Tyler isn't the same boy she lost?

Perfect for fans of The Fifth Wave and the Body Finder series, The Replaced is both chilling and explosive, with creepy, otherworldly elements and twisty, psychological thrills that will have you questioning what exactly it means to be human.

When you love a first book so much, it is really hard not being excited about the sequel and even harder to not have high expectations for said sequel. Which is why I went into The Replaced with such hope that I would love it every bit as much as I did the first.

And while I did struggle a bit in the beginning with a slow start, I did end up loving this. Maybe not quite as much as the first book but overall I was once again thrown right into Kyra's crazy mixed up life of being on the run, worrying about those she left behind, info about the aliens themselves, and trying to get more information about what being a Returned means.

Throw in a bunch of conspiracy, a love triangle (I know, I know, it didn't need to be there but some how it did add to the story), and more perplexing info on the Returned and you got one heck of a plot line, one that left me with more questions than answers and itching to get my hands on book three.

Overall I'm pretty happy with the way this turned out and it was a worthy sequel to the first.