I love Nora's books, I mean honestly, who doesn't that has tried them right but her new series, is bound to be one of my favorites yet which is why I'm so excited to be a part of the tour! 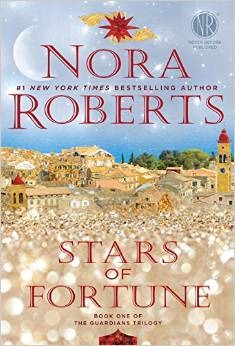 Releases: November 3, 2015 (ARC Copy Provided by the Publisher (in exchange for an honest review))
Published By: Berkley
Series: Book One in the Guardians Trilogy

To celebrate the rise of their new queen, three goddesses of the moon created three stars, one of fire, one of ice, one of water. But then they fell from the sky, putting the fate of all worlds in danger. And now three women and three men join forces to pick up the pieces…

Sasha Riggs is a reclusive artist, haunted by dreams and nightmares that she turns into extraordinary paintings. Her visions lead her to the Greek island of Corfu, where five others have been lured to seek the fire star. Sasha recognizes them, because she has drawn them: a magician, an archaeologist, a wanderer, a fighter, a loner. All on a quest. All with secrets.

Sasha is the one who holds them together—the seer. And in the magician, Bran Killian, she sees a man of immense power and compassion. As Sasha struggles with her rare ability, Bran is there to support her, challenge her, and believe in her.

But Sasha and Bran are just two of the six. And they all must all work together as a team to find the fire star in a cradle of land beneath the sea. Over their every attempt at trust, unity, and love, a dark threat looms. And it seeks to corrupt everything that stands in its way of possessing the stars…

Nora Roberts was born in Silver Spring, Maryland. She began writing when a blizzard in February 1979 kept her in her hilltop home with a three and six year old for nearly a week of canceled kindergarten and dwindling chocolate supplies.

During the now-famous blizzard, she pulled out a pencil and notebook and began to write a story for her own entertainment. From the first page, she knew it was what she was meant to do. Several manuscripts and rejections later, Irish Thoroughbred was published by Silhouette in 1981.

In 1995, she began writing a police procedural series featuring Eve Dallas, a NY homicide cop, and set in the near future under the J.D. Robb pseudonym. Devoted in Death, out in September 2015, is the 41st entry in the series.

It has been way too long since I have read a Roberts book, and in doing so, it reminded me all over again why she truly is a master in her craft.

Her books are engaging, fun, well written, designed, and executed. Easy to get into and hard to step away from, this is another series that fans are just going to adore.

Reminiscent of two of my favorite series by her, Three Sister's Island and the Circle Trilogy, it was no wonder this was a hard one to put down.

I loved all the magical elements, surprises, and adventure, not to mention romance, along the way. Very much all the things I look forward to when starting one of her books.

I am so excited about this series and truly can not wait for more. I loved the darker elements it had as well as the insta friendship between these six people. This is truly going to be a memorable series.