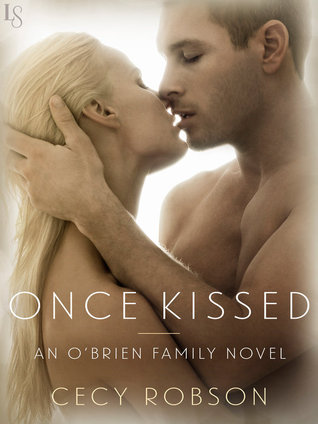 
Book Description:
Once they shared a night of passion. Now a chance encounter forces them back together. In Cecy Robson’s O’Brien Family series debut—perfect for readers of Monica Murphy and J. Lynn—two total opposites find that the flames of desire are still smoldering.

Tough-as-steel cop Curran O’Brien is quickly rising through the ranks of the Philadelphia police department. But when his rookie partner is almost killed under his watch, Curran just wants to prove he still has what it takes to walk among Philly’s finest. So he’s pissed to be stuck on a cushy security assignment for the DA’s office . . . until he gets a good look at the sweet, straitlaced intern he’s supposed to protect—but not touch.

Tess Newart recognizes Curran instantly. How could she not? Back in college she tied this former frat boy to the bed with her argyle socks! That sizzling one-night stand was the only indiscretion Tess ever allowed herself. She has survived law school so far, despite being pushed to succeed by her overbearing father. Now that she’s interning on a major case against a ruthless crime boss, she won’t jeopardize her career by giving in to temptation again. She just never expected temptation to look so damn hot in uniform.

Tess knows her father has other plans for her, and they don’t include Curran. But soon she’s falling for him all over again. And when danger emerges, Curran will prove just how good a bad-boy cop can be.

It is with eager anticipation and excitement that I pick up ever read by Robson but this one promised to be even more special. After all, we were not only getting glimpses from some of our past favorite characters in the Shattered Past series but, more importantly, we were getting the O'Brien clan.

The lovable crazy family featured in Once Pure, that was every bit as fun and unpredictable as I was hoping they would be and I couldn't have been more excited to jump in and officially meet them all.

It took me about one page to decide that I already was in love with both Declan and Curran and knew that I was on the path to another fabulous series by Robson. One that promised to be every bit as entertaining as it was going to be swoon worthy and fun and probably emotional as well if this lived up to all the other books by this author.

I'm happy to report that I was right on all counts and this turned out to be an amazing read that kept me up reading long past the time I should have been.

I completely loved the O'Briens and it truly was so nice seeing Killian and Sofia together again and not only them, but Brody and Lety too! That was a surprise I wasn't expecting and I absolutely loved it!

I felt so much for Tess in this novel. It was hard not to be heart broken for her and her circumstances and most of all, I wanted her father to get what was coming to him. I don't think I have loathed a character as much as I did him since the famous Umbridge from the H.P, series. I wanted to reach through the pages and throttle the vile man. I also wanted Tess to be strong and stand up to him more than anything else. And every time she encountered him, I wanted to be strong for her, to give her strength to face him and to say no to him.

Curran was such a great character. A cop in every way but also a loving brother, friend, and an all around great funny guy that was incredibly hard not to swoon over.

This was such a fantastic read and I can't wait for more from the O'Briens. I truly hope they all get their turn in the spotlight.

Robson has done it again and created an emotionally charged read with swoon worthy characters, laugh out loud moments, and wonderful messages all laced throughout the book.

She truly is a talented writer that never ceases to amaze me with her words.