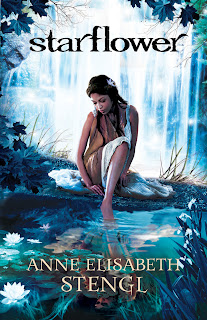 Series: Book Four of the Tales of

Synopsis:
Never Get Involved in the Affairs of Mortals

When a cursed dragon-witch kidnaps lovely Lady Gleamdren, Bard Eanrin sets boldly forth on a rescue mission . . . and a race against his rival for Gleamdren's favor. Intent upon his quest, the last thing the immortal Faerie needs is to become mixed up with the troubles of an insignificant mortal.

But when he stumbles upon a maiden trapped in an enchanted sleep, he cannot leave her alone in the dangerous Wood Between. One waking kiss later, Eanrin finds his path entangled with that of young Starflower. A strange link exists between this mortal girl and the dragon-witch. Will Starflower prove the key to Lady Gleamdren's rescue? Or will the dark power from which she flees destroy both her and her poet rescuer?

Author Bio:
Anne Elisabeth is the author of the Tales of Goldstone Wood, a series of fantasy adventure novels told in the classic Fairy Tale style. The series so far includes Heartless, Veiled Rose, Moonblood and Starflower, with Dragonwitch due to release summer of 2013.
Anne Elisabeth is married to the handsome man she met at fencing class and lives with him, a gaggle of cats, and one long-suffering dog in NC. Her first novel, Heartless, won the 2011 Christy Award for Debut Novel and was an INSPY Award finalist. Her second novel, Veiled Rose, won the 2012 Christy Award for Visionary Novel and was a Romantic Times Inspirational Novel of the Year finalist.

Author Interview:
MGO: Thank you so much Anne for being here today!
In 10 words or less tell us why we should read your book.

MGO: When you were younger what was it that you wanted to be when you grew up?

Anne: I wanted to be a writer, actually! Or, both a writer and an artist. And before I took up fulltime writing, I worked as an art teacher and portrait painter, so I've been blessed with opportunities to live both dreams.

MGO: Who is the one most influential person in your life?

Anne: Probably my mother. She was a professional novelist herself (multi-published and award-winning), and she was a huge inspiration to me when I was younger. I would watch her working intensely on novels, editing and rewriting and editing again. So much dedication! But it made the professional publishing world seem very possible to me. And she was so encouraging to my early attempts at novel-writing, offering guidance and direction. She is still the first person to read my manuscripts . . . I send her every chapter as I write it for her stamp of approval!

Anne: YA fantasy, no doubt about it! I love that genre. Love, love, love it!

Anne: Gah! This is hard! Okay, here goes:
1. The Chronicles of Narnia by C.S. Lewis (I'm cheating and counting all as one. They're short, after all!)
2. Nation by Terry Pratchett
3. Till We Have Faces, another by C.S. Lewis
4. The King of Attolia by Megan Whalen Turner
5. Fire and Hemlock by Diana Wynne Jones
But I reserve the right to alter this list spontaneously at any given moment!

MGO: If you could meet one person alive or dead who would that person be?
Anne: C.S. Lewis. He had such a beautiful imagination and was so wise and clever! I would love to just sit over a pot of tea and talk literature and stories and myths and theology with him for hours (until the tea grew cold).

MGO:  What do you have in the works next?

Anne: I am currently finishing up the first draft of Book 6 in the Tales of Goldstone Wood. Then I have a round of edits on Book 5, Dragonwitch, which releases summer of 2013. So plenty more adventures to come!

MGO:  If you could only have one food for the rest of your life, what would that be?

Anne: Scones with Devonshire Cream (and tea, which is a drink, so not cheating, right?).

MGO: Which do you prefer, e-books, audio, hardback or paperback?

Anne: I am a hardback girl at heart. I love the elegance of hardbacks, how lovely they look on the shelf, and how sturdy they are, staying nice even if hauled all over the place. And nothing smells as good as a new hardback book! But paperbacks are nice too, and I used to listen to audio books while painting portraits, so I have a soft spot for them too.
Thank you for the feature on your lovely blog! These were fun questions (and now I’m hungry for scones with cream!). I hope all of you will get a chance to read my new novel, Starflower. Be sure to visit me on my blog: anneelisabethstengl.blogspot.com

MGO: Thank you again Anne for being here today and for letting us get to know you a little better. This interview was so much fun!! I can't wait to try out your books, they really sound like they would be quite the adventure!!
Posted by Kindlemom at 12:30 AM