Review: Love and Other Perishable Items by Laura Buzo 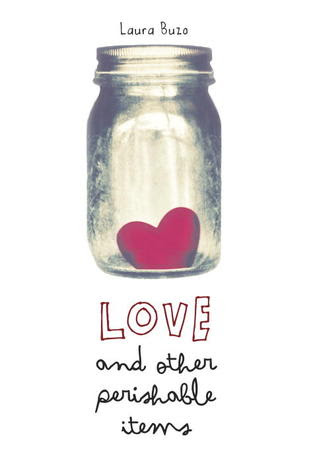 From the moment she sets eyes on Chris, she is a goner. Lost. Sunk. Head over heels infatuated with him. It's problematic, since Chris, 21, is a sophisticated university student, while Amelia, is 15.

Amelia isn't stupid. She knows it's not gonna happen. So she plays it cool around Chris—at least, as cool as she can. Working checkout together at the local supermarket, they strike up a friendship: swapping life stories, bantering about everything from classic books to B movies, and cataloging the many injustices of growing up. As time goes on, Amelia's crush doesn't seem so one-sided anymore. But if Chris likes her back, what then? Can two people in such different places in life really be together?

Through a year of befuddling firsts—first love, first job, first party, and first hangover—debut author Laura Buzo shows how the things that break your heart can still crack you up.

I am not going to lie, it took me a little while to warm up to this book. It wasn't the writing or even the characters, I think it was simply that I had such high expectations for this one that I was expecting...I don't know, just more I guess.

I think I was expecting it to be more of a love story, something I could really connect to, something more humorous, more.....well just more.

Don't get me wrong. I didn't hate this book, I didn't even dislike it, in fact over time (about 35% in) I even started liking it and finally warmed up to it.

Well most of it. I never did warm up to Chris. I just couldn't. He seemed immature at times and completely oblivious at others. All he cared about was finding the perfect girl and getting hammered. Okay, he did care about other things but drinking and partying played too big of a roll in his life and not in the good bad boy kind of way that sometimes works in books.

The worst part is that he was actually a really smart guy..book wise. Just not when it came to love. Or girls. Or relationships.

Amelia was a smart girl but again someone who made stupid choices. She gave her heart to someone knowing that it would never work. That there couldn’t' be a future there and I can't say she was stupid for doing it but..well she was stupid for doing it. But when we are teenagers don't we all make stupid mistakes like giving our heart to someone who doesn't deserve it? It is part of growing up, so I appreciated that side of the story. I know not everyone gets a happy ending, especially as a teenager but oh wouldn't it be nice if we did?

I wish I could say I loved this as much as I thought I would but I didn't. I don't want to give anything away but the ending was very unsatisfactory. It left me feeling sad and strangely robbed.

This wasn't a bad read really and maybe I am being slightly too hard on it but I just felt disappointed.
I can't justify giving this one anything higher than 3 Stars feeling the way I did by the ending.

I don't know if the author has a sequel planned or if that ending was just it but, I would love to see one. I would love for this to have turned out differently and a little more up beat.

On a more positive note, I did love the two very different POVs and how they were handled. It was something unusual and different and it worked. Also, being the cover whore that I seem to be lately, I love the cover. So simplistic and pretty.